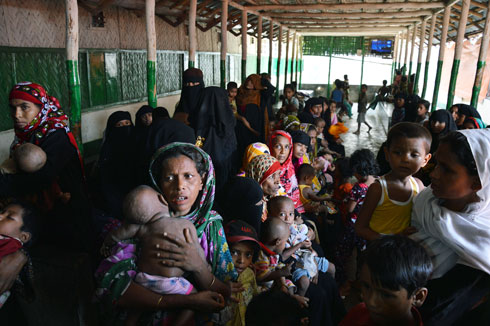 As the persecution of the Muslim minority in Rakhine State in Myanmar/Burma reaches a feverish pitch and forces thousands to flee to neighboring Bangladesh, Columban Superior General, Fr. Kevin O’Neill, sends a message of solidarity saying, “We reject persecution of any community regardless of religion, race, or ethnic identity. We urge an end to the violence and violation of human rights of the Rohingya people and hope for their peaceful return to their homes in the Rakhine State of Myanmar/Burma.”

Columban missionaries urge the government of Myanmar/Burma to immediately allow international humanitarian assistance to reach people in need and to seek long term peace and protection for the Muslim minorities of the Rakhine State and ethnic minorities throughout the country.  We support the Caritas Internationalis campaign for refugees and migrants, “Share the Journey” which launches September 27, 2017, and hope that it will contribute to a global response of support for the Muslim minorities forced to flee Myanmar/Burma due to violence and persecution.

In May 2016 Cardinal Bo, Myanmar/Burma’s first Cardinal, spoke at the United Kingdom’s parliament saying of the Rohingya crisis that is, “an appalling scar on the conscience of my country… No human being deserves to be treated this way.  Without [a solution], the prospects for genuine peace and true freedom for my country will be denied, for no-one can sleep easy at night knowing how one particular people group are dying simply due to their race and religion.”

In February 2017 Pope Francis delivered a message of prayer and love for the Rohingya people saying, “They are good and peaceful people.  They are our sisters and brothers.”  Columban missionaries share this feeling of unity with all people of good will and faith. Pope Francis will be visiting Myanmar/Burma in late 2017, the first papal visit to the country in history.

In a joint statement released by the Catholic National Justice and Peace Commission of Pakistan, the President of Pakistan Catholic Bishops’ Conference His Grace Archbishop Joseph Coutts and His Excellency Bishop Joseph Arshad, Chairperson of National Commission for Justice & Peace, pleaded that the State Counsellor/Noble Peace Prize Honorable Aung San Suu Kyi being the beacon of peace should ensure the full rights of Rohingya people. Furthermore, they appealed to the democratic Government of Burma/Myanmar to immediately intervene by ceasing all military operations in Northern Rakhine State. Pakistan is estimated to be home to one of the largest Rohingya population outside of Myanmar/Burma.

Columban missionaries are present in Myanmar/Burma and in Pakistan.  We work with the local church in carrying out its mission of evangelization which includes working for peace, justice, and care for creation.