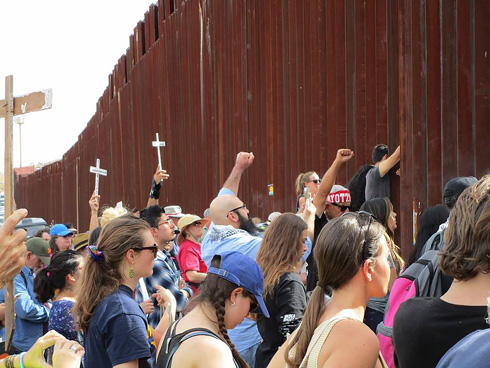 The Columban Mission Center opened its doors to some of the thousands of refugees that have been processed by Immigration and Customs Enforcement (ICE) over the past three weeks, and released people to the care of about 20 emergency shelters set up by Catholic, Lutheran, Methodist and Episcopalian (Anglican) churches throughout the city of El Paso, Texas, and other area communities.

Ruben Garcia coordinated the response of the Borderlands, as the director of the area's oldest refugee shelter, Annunciation House.

The people who cross the border from Mexico to the US, asking for asylum, arrive as families, children and adults. In reality, they are far from resembling the threatening creatures that President Trump claims are rushing to inundate our country and commit violence. Rather, it is soon clear that they come from cultures where helping with the cleaning and washing up is an unspoken expectation of guests. They take to the kitchen and bathrooms armed with brooms and washcloths without waiting to be asked, no doubt finding solace in domestic routines they are familiar with, finally finding a place to fit in and help out. Traumatised by weeks of wandering and mistreatment, it seems intensely healing for them to engage in housekeeping.

It is a delight to get to know people who keep their cultures, languages and customs - to hear the echoes of a high-pitched, melodic indigenous languages, or the brave songs of the socially aware people of El Salvador, accompanied by skilled guitar players. Two diminutive mothers can be noticed working together in the kitchen, bent over the sink, one with an infant quietly sleeping inside the colorful cloth tied tightly across her back. Their arms work freely and efficiently, washing, rinsing and placing each plate in the drying rack with speed and grace.

Mr Ruben García, founder of the 40-year-old Annunciation House shelter for undocumented migrants in El Paso, is the coordinator of the community's response to the large number of refugees that US Department of Homeland Security forces release two or three times a week. He acquired further space for housing them while they prepare for journeying further into the country to join their relatives and friends already here, by renting two small motels in the area, with donations from his supporters. Many faith communities in the Borderlands began offering help.

"Our coalition of church temporary hospitality centers have been able to receive 750 refugees per week," Mr Garcia stated. "What these churches have been doing is nothing short of miraculous."

"But", he added, "it is not enough. If we want to get the refugees out of those holding cells, we need to significantly increase the number of refugees we receive."

The holding cells are a terrible, abusive experience that await people asking for asylum. In Spanish, the refugees call them "las hieleras" (the coolers), where they have no beds, no showers, no hot food, and which are often crowded. Designed to hold people for a few hours while their criminal backgrounds are checked on Interpol's data base, refugees can spend days there, even a week or more, before they are either taken to a detention facility or, if the beds are full (and the contract with private security firms are then fulfilled), they are taken to the humanitarian shelters in our city.

By late October, further shelters were opened for the first time. The spacious campus of classrooms and offices of the diocesan headquarters, centered on its Pastoral Center, welcoming over 200 refugees on its first day as an emergency shelter, with Bishop Mark Seitz the first to welcome the guests as they descended from the ICE buses and arrest vehicles. He directed his staff to begin to organise sleeping and dining areas for the arrivals, while others interviewed each person and family, and facilitated their transportation to other areas of the country. "We must lead by example," he said.

Shockingly, one Friday evening we learned of something unheard-of - ICE dropped off over 70 refugees at the local Greyhound bus station, without any communication with Mr Garcia or anyone in the local community, prompting the arrival of police. Mr Garcia learned of this quickly and rushed over, and with the help of the volunteers at Annunciation House began to send out messages asking for help - food, clothing, volunteers. He then began walking with the entire group - the distance of about a mile - to a local Catholic church, Holy Family. The parish community was alerted ahead of time and opened the doors to the parish school, while food and clothing and volunteers poured in from all over the city within minutes.

Mr García announced by phone text, earlier in the day, that a total of 278 people were to be released by ICE and transported to eight separate emergency shelters, including our facility, the Pastoral Center of the Diocese of El Paso, Blessed Sacrament parish and two hotels, among other places. When it became evident that our guests would not arrive, I imagined that when 54 persons are taken by bus to the shelter run by the Loretto Sisters, for instance, or another 60 to St Anthony of Padua parish, the 10 people destined for our little house, already lodging 13 people in a group organised by the Sisters of Mercy for a Border Awareness Experience, were easily mixed in with others and decided to join the larger groups as they descended the vehicles.

The Border Awareness Experience (BAE) participants are here from all over the US, some of them religious sisters and others associated in some way with the work of this congregation in Nebraska, Washington, DC and Michigan. They already have years of experience working with migrant communities in their respective home areas, or advocating for immigration law reform and related issues.

Along with sharing the facilities of the Columban Mission Center with the expected refugees, as we usually plan for, the week-long BAE program also brings the visitors into conversations with both Department of Homeland Security representatives, on the one hand, and legal experts that provide services to refugees and migrants at an affordable or even no cost.

We also visit the international wall itself-an ugly, imposing structure of rusted steel running in a straight scar-like line across an undulating desert landscape just outside the city of El Paso, tall enough to ensure broken limbs in the event someone tries to scale it and jump from the top of its 18-foot height. Indeed, people are occasionally found, injured and lying on the ground, at the foot of the fence, unable to go any further into a land they hoped would give them safety and peace. Many die in the attempt to cross in less-fortified areas of the border, in mountain wastes, lost and without sufficient water for reaching a community. The Border Mass concelebrated by clergy and faithful from both Mexico and the U.S. each year, near the Feast of All Souls, is to remember to pray for these victims of a broken immigration system.

This year the Mass took place at the same Anapra barrier we will visit this morning, described above. The US Border Patrol participated in the planning, in order to ensure that no one would cross from one country to the other during the Mass, passing through the large gate that would be opened on this occasion. However, despite previous assurances and agreements, the Border Patrol agents announced that the gate would remain closed during the Mass, since they received a report that a group of Guatemalan refugees were planning to rush the open gate during the Mass-a report that no one seriously believes. The Eucharistic bread and wine were consecrated from the Mexican side of the border fence, but since the chalices could not physically pass through the small spaces of the barrier to the US side, to allow the faithful to partake of the Precious Blood, the consecrated wafers of bread were dipped in the chalices and shared through the barrier by hand. Trump's Wall could not keep the Blood of Christ from being shared among one People of God, on both sides of this artificial barrier.

See a video of the Mass at the Wall: www.youtube.com/watch?v=WtB4rkIESE4