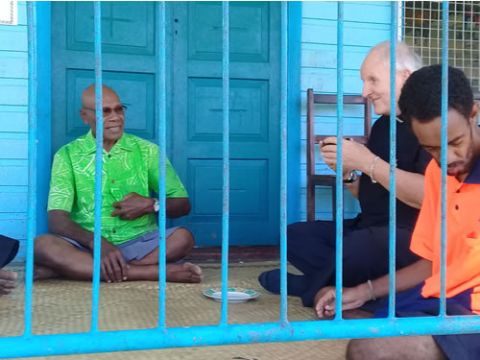 It all started about three months ago when catechist Timoci Matakiviwa turned up on our doorstep offering to compose a Centennial Meke for us. The Meke is the traditional Fijian dance. Columban Frs David Arms and Ioane Gukibau were there that day, and we together determined that this would indeed be a fitting addition to our Centennial celebration so we said yes.

The next step was to find the dancers. About 40 dancers together with their choir would be needed. The catechist was keen to use the school children at nearly Sacred Heart College, but we felt this would be too difficult. Eventually we thought of Ba and the St. Columban sector there in the village of Votua. We asked Fr. Nilton Iman of Ba to approach them, and they graciously consented.

The Catechist traveled by bus to Ba every week from his village and met with the children after school and he gradually trained them to get the Meke correct. Some hold fans, some hold war clubs, and it is a question of coordinating the gestures and the movements. Another part of the preparation is to prepare the sulus or costumes for the Meke. We had to buy the materials and the parents did the sewing.

At last we agreed on a day for the official presentation of the Meke to the Columbans. This presentation is called the Sevu ni meke in Fijian. After this it belongs to us and can only be used if we agree. The agreed time was 11 a.m. on Saturday, June 10, just two weeks before the Centennial celebrations. I drove halfway around Viti Levu, the largest of our 310 islands here in Fiji. On the way I met with the men’s group of Lautoka, our former Columban parish, who are planning a pilgrimage to the Holy Land in Nov 2019. Our gardener, another catechist, Leone, accompanied me to keep me on the straight and narrow when it came to the cultural details involved in receiving the dance.

I arrived in Ba just in time to join the gathering of the Columban Companions in Mission (CCIM). They had finished a money raising evening, and I joined in and had some Kava with them and gave them an update of our Fiji Columban news and schedules, e.g., that Deacon Martin Koroiciri’s ordination to priesthood will hopefully be on November 22, 2018, at 5:30p.m., the vigil of St. Columban.

After 9:00a.m. Mass in Ba which I concelebrated with Fr Kieran Moloney I travelled to the village. People were preparing when I got to the village. We sat on a school veranda where the people offered me a traditional welcoming bowl of Kava, a sevusevu. In return I produced a roll of Kava and offered it to the village.

When these preliminaries were over, the children were led out by the Catechist Timoci, the composer. He ensured they were lined up properly, all 40 of them, and then he himself then sat down to lead the choir using a traditional Fijian drum called a lali. 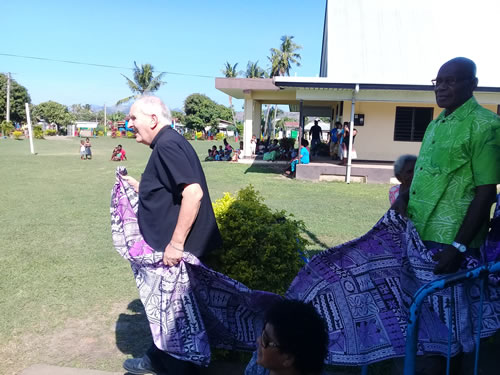 The dance itself took about 20 minutes to perform and was very beautiful. The choir sits in the middle, and they dance out from this center forming the four arms of the cross. It was a delightful performance and will greatly enhance our celebrations. The song thanks God for the story of the Columbans from the rime of Bishop Galvin’s first going to China and then Fr. Blowick joining him and moves right up to our mission here in Fiji starting in 1952 and beyond. In Catechist Timoci’s second visit to us in Suva, he got some books from us and got us take him carefully over the timeline of the Society. This formed the basis of the song of thanksgiving for which he adapted a traditional musical score.

During the Meke, I led a party to surround the dancing children with a few bales of cloth strung out and tied end to end. This is a traditional sign of gratitude and appreciation for the efforts that the dancers are putting into the dance.  When the Meke was over I proceeded through my spokesman, Catechist Leone, to present Timoci with a whale’s tooth (the highest sign of respect in Fiji), two drums full of kerosene and some bales of cloth. This is the traditional thanksgiving and “payment” to the composer, called the Dau ni Vucu, for the dance which now becomes the Columban Centennial Dance. I then joined the children to thank them for their efforts, and we provided a morning tea for them. The Votua CCIM had prepared a delicious fish lunch for us and after that, we continued on our journey back to Suva, completing the full circle around Viti Levu.

Columban Fr Donal McIlraith has been chaplain to the Banaban and Gilbertese communities in Fiji since 1990 as well as teaching scripture classes in the Pacific Regional Seminary. He is currently the Regional Director in Fiji.