Pillars of Peace -The Abraham Conference 2018 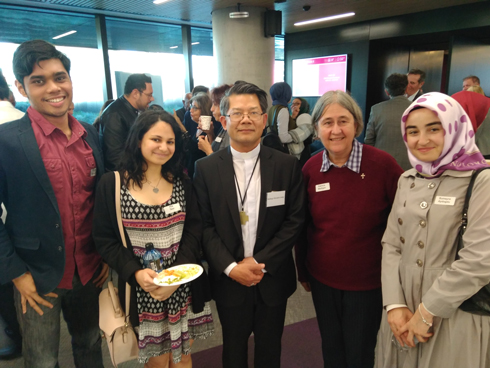 The 2018 Abraham Conference was held at Western Sydney University, Parramatta on Sunday 5th August.   The theme was “Pillars of Peace: Jews, Christians and Muslims Working Together”.  Rev Dr Patrick McInerney welcomed all present very appropriately, using the traditional religious greeting of Judaism, Christianity and Islam—“Peace be with you”—in Hebrew, Latin and Arabic.  Shirley Gilbert, a lecturer in Secondary Education at Western Sydney University, gave the Acknowledgement of Country.  This was followed by recitations of a Jewish prayer and readings from the New Testament and the Holy Qur’an.

Professor Kevin Dunn, Dean of the School of Social Science & Psychology at Western Sydney University and Facilitator for the conference, then introduced the keynote speaker, Mr Steve Killelea, the Founder & Executive Chairman of the internationally acclaimed Institute for Economics and Peace.

Mr Killelea gave a fascinating account of the Institute’s research on peace.  He detailed the indicators they use to measure peace, enabling them to rank 163 countries in order of peace and their improvement or deterioration in peace.  In the last decade, 75 countries became more peaceful but 85 countries deteriorated, leading to an overall global decline in peace of 2.38%.  Australia ranks 13 and is stable, showing neither improvement nor decline.  While deaths in battle and from terrorism have increased, on a more positive note, 58% of countries show reduced military expenditure and 70% of countries had a drop in the homicide rate.

The consequences and economic costs of violence are enormous.  Nearly 1% of the global population are now displaced.  The global cost of violence in 2017 was $1.48 trillion dollars i.e. or $1,988 per person or 12.4% of global GDP.  Positively, peace yields significant economic benefits, in terms of higher incomes, better environmental outcomes, and higher GDP growth per annum.

Contrary to false accusations, religion is not the sole cause of armed conflict.  There is usually a variety of factors.  86% of conflicts have more than one cause.  When religion is a causal factor, it is more accurately described as the use of religion for another cause.  While religion may have a slight positive impact on peace, the major factors that lead to or away from peace are social and political.  For example, positive peace is more likely with a well-functioning government, equitable distribution of resources, good relations with neighbours, low levels of corruption and high levels of human capital and the acceptance of the rights of others. 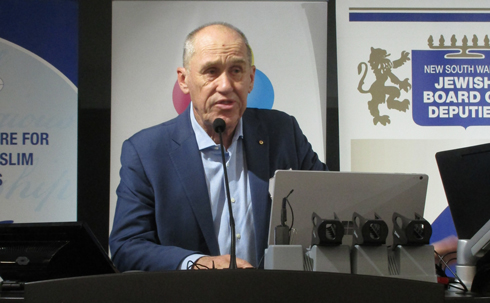 Mr Steve Killelea, the Founder & Executive Chairman of the internationally acclaimed Institute for Economics and Peace

The empirical data from the Institute for Economics & Peace provides cutting-edge information on what promotes and what hinders peace. The Institute’s findings are available online, including the Global Peace Index 2018 at https://goo.gl/LqvkBn and the Positive Peace Report 2017.

The panel was followed by Q & A, social interaction over refreshments, small group discussions and a final plenary to gather it all together.  The 2018 Abraham Conference provided a very rich, challenging and fruitful discussion for all who participated; but the question was asked, how come more people did not attend and participate in these very important discussions?

In conclusion, representatives from the Organizing Committee thanked all for their attendance and active participation in the process, and gave a vote of thanks and presented gifts to each of the speakers.

The Abraham Conference is planned, organised and co-hosted representatives of Affinity Intercultural Foundation, the Australian Egyptian Forum Council, the Columban Centre for Christian-Muslim Relations, the NSW Jewish Board of Deputies and the Uniting Church in Australia: Synod of NSW & ACT.