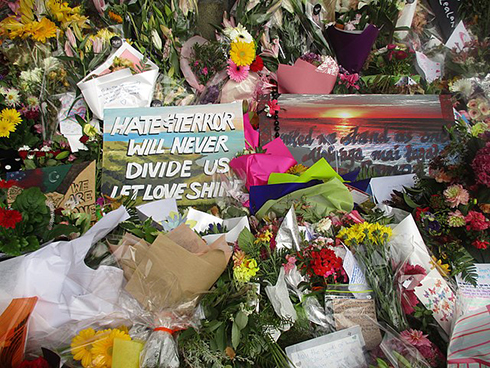 It was a week like none other in New Zealand history. There was shock, pain and disbelief. Then people came out in their hundreds and thousands to share the pain, to pray together and follow the example of a remarkable leader and a young mother, Jacinda Ardern.

I was in Melbourne when I first heard the news about the murderous rampage that took place in the two mosques in Christchurch on Friday of March 15. There was a feeling of overwhelming numbness. This could not be happening in my homeland.

I returned to New Zealand on the Sunday of that weekend. As the shuttle drove around the Basin Reserve, we witnessed the crowds of people gathered on the narrow footpath, waiting to get into the cricket ground where a memorial service was being held. It was one of many throughout the country as people gathered and gave support to Muslim brothers and sisters who were mourning their loved ones who had been murdered in Christchurch.

On Wednesday evening Don Hornsey and I went down to the local football ground here in Lower Hutt. Don had heard that the local Hutt City council was planning a service or gathering in support of Muslim families in the Hutt Valley. We had arrived about half an hour before the service was to begin at 7.00pm and there were very few people present. We were somewhat disappointed. As the school and community choirs arrived, we made our way over to the main stand. Then, as if on cue, waves of people began ambling over to the stand from the various entrances around the park. It was a very moving experience as we remembered and named the 50 people who had been murdered in the two mosques in Christchurch.

The following morning Don and I went over to the Kilbirnie mosque to meet the president of the Islamic communities of New Zealand. Outside the entrance to the mosque was an armed policewoman - an unfortunate but necessary precaution to ensure the safety of all mosques in New Zealand at that time. On the pavement alongside the mosque, people - largely children - had written messages and expressions of love and support in chalk.

The mosque was open. Inside we met the president. After introducing ourselves I gave him the two letters from Fr Tim Mulroy, our Society leader, and Fr Patrick McInerney, the director of the Columban Centre for Christian-Muslim Relations which is based in Sydney, Australia. He gave us each a bottle of water. As we chatted, three other men joined us. The president, Mr Tahir Nawaz, was a very considerate host who showed particular interest in the Centre for Christian Muslim Relations.

He asked if Fr Pat could come over to New Zealand and speak to us about Christian-Muslim Relations. In writing to Pat that evening about this visit I thanked him for his letter and explained the impact it had upon the president of the local Association of Islamic communities.

Following lunch the next day, Don, Paul Finlayson and I made our way over to the mosque at Taita. It was a converted block of three shops. Around the back, where people had gathered, I met Mr Sameer El-Matary, the chairman of the Hutt Valley Trust and local Muslim community.

It was a very special and moving occasion. After meeting many people who had gathered, there was a moment of silence at 1.32pm, the time when the shooting began in Christchurch a week ago. Then, the men were invited to join their Muslim brothers into the mosque to pray. It was memorable occasion. I never knew that there was a mosque in Taita which is near the Columban Mission in Lower Hutt. I would never have imagined that one day I would join with Muslims in New Zealand as we prayed together in their place of prayer.

Mr Sameer El-Samary sent me an email of appreciation a week later. Towards the end of my response, I said that “it had been very painful to hear of the murder of the 50 members of the Islamic communities in Christchurch. But we also learnt of the difficult experiences of Muslim brothers and sisters who have migrated to this country.

“I now pray and hope that the wonderful gatherings of support and love over the past two weeks, inspired by the example of our Prime Minister Jacinda Ardern, augurs well for the future of Aotearoa (New Zealand) and especially for the Islamic communities in our country.”

Columban Fr Tom Rouse was a missionary in Fiji from 1976-2014. He is now Mission Coordinator of St Columbans, Lower Hutt, New Zealand.