Speaking the truth can be a risky undertaking 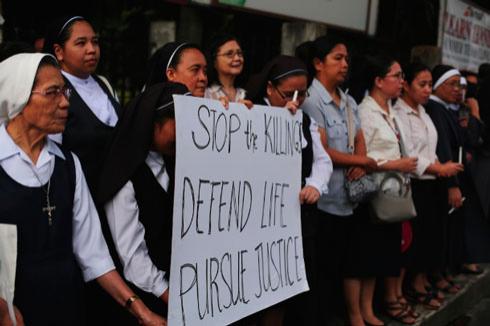 A group of nuns join a candle-lit demonstration in Manila to protest attacks against members of the clergy. (Photo by Jire Carreon)

What greater duty does any person of integrity have than to speak the truth about that which is morally wrong, unjust and despicable?

To speak one’s mind, to challenge injustice, abuse, exploitation, torture and the unlawful taking of life is a serious obligation. It is a right to do so, supposedly without fear of retaliation and persecution.

There is always the threat, fear, and acts of retaliation against those brave and courageous people who speak the truth to the powerful.

History is full of heroes arrested, tried in a court, condemned, and put to death for speaking the truth, challenging injustice and oppression, taking a stand against what is clearly wrong and immoral.

When we look upon a crucifix, we see an innocent man who believed and practiced the great values of equality, rights of all, justice, truth, freedom and dignity of women and children.

We see a person who stood his ground. He taught the truth, healed the sick, championed the poor and challenged corrupt oppressive authorities.

He was betrayed, falsely accused of subversion, libel, and blasphemy. He was arrested, jailed, tortured and put on trial, wrongly condemned, and given the death penalty.

He is a person we can admire and imitate, and those who are true believers in the values he taught and lived and died for will do likewise. They will proclaim the truth and oppose wrongdoing by individuals, groups, institutions or government.

Hundreds of people living out that commitment to justice have suffered. Many had their lives taken or destroyed by the forces they challenged, questioned, and opposed while working for human rights and social justice.

It is a privilege and honor to fight for justice and defend the right to life and dignity and to be persecuted for it.

So the four Philippine bishops, several priests, a religious brother, and lay people who are being charged with sedition and libel by authorities can count themselves blessed and privileged to follow in the footsteps of Jesus of Nazareth.

Philippine authorities have filed sedition, cyber-libel, libel, and obstruction of justice charges against 36 people including the country's vice president and members of the opposition.

They are all seen to have advocated the right to life and security and have spoken out in protest at the killing of many people by death squads and police raids on suspected drug users and dealers. However they are being charged with sedition, more or less as Jesus was.

He said to his disciples, “If the world hates you, you must remember that it hated me first. If you belonged to the world, then the world would love you as its own.

"But I choose you from this world and you do not belong to it, this is why the world hates you. Remember what I told you, ‘No slave is greater than his master.’ If they persecuted me, they will persecute you too.” The Gospel of John 15:18-20

The charges are for libel, cyber libel, and sedition that stem from the release of a video that went viral on several social media platforms early this year that linked President Rodrigo Duterte and his family to the illegal drugs trade.

The accused supposedly "planned to spread false information" against the president's family and administration officials. It said the accused aimed to "agitate the general population into staging mass protests with the possibility of bringing down the president."

All the accused have filed their affidavits in response to the charges denying anything whatsoever to do with that video and the allegations it proposed. Other commentators observe that it is an attempt to silence criticism from dissenting voices.

The presidential palace has distanced itself from the police action. "We have nothing to do with this case. Not at all," said Salvador Panelo, Duterte's spokesman.

Others observe that the police charges brought before the prosecutor is ill-advised, as it will only hurt the president and his family by continually bringing before the public the baseless allegations by playing the outrageous videos over social media.

Many are asking, who else is standing up for human rights, besides these people and brave media people and rights advocates? Meanwhile, surveys show that the Philippine president is receiving 80 percent approval ratings.

Irish Fr Shay Cullen, SSC, established the Preda Foundation in Olongapo City in 1974 to promote human rights and the rights of children, especially victims of sex abuse. The views and opinions expressed in this article are those of the author and do not necessarily reflect the official editorial position of ucanews.com.