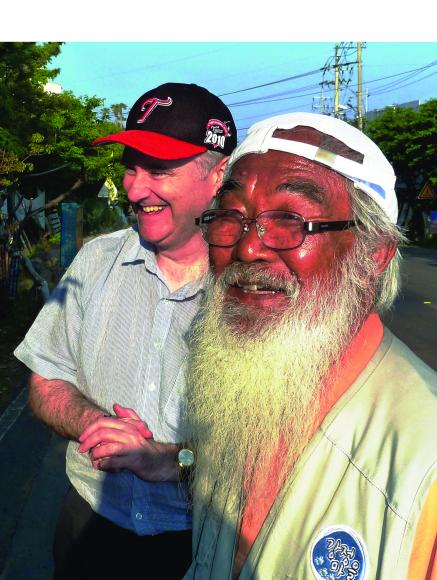 I recently saw a banner with the striking reminder to all humanity that if we refrain from violence against creation, mother nature in her wonderful generosity will provide all living things with shelter, food, water and oxygen to ensure a flourishing and sustainable life-the key is our interconnectedness and interdependence. To paraphrase Martin Luther King, I believe we have come to a critical juncture in our journey of awareness of a stark choice that exists between nonviolence and nonexistence.

Recently I had the opportunity with a number of Columban colleagues to join Fr Mun Jeong Hyen, an activist priest, and other peacemakers in participating in the early morning 100 Bows for the Life and Peace of Gangjeong - Fr Mun likes to refer to the daily bows as his ‘morning prayer’. Each of the 100 bows is basically a solemn vow and promise to engage in nonviolent resistance against the destruction of the environment and ongoing militarisation of the island of Jeju. “While the 100 Bows represent a challenge to my creaking bones, I always feel refreshed and somewhat revitalised with the knowledge that all the participants are stubborn in declaring a resounding NO to war preparations.”

The United Nations Secretary General, together with Pope Francis, have been vocal in calling for a de-escalation of military build-up during the Covid-19 pandemic, but apparently these calls have fallen on deaf ears. The Gangjeong community has joined calls seeking a suspension of RIMPAC 2020 in Hawaii, the bi-annual war exercise where the Republic of Korea (ROK) has taken a leading role this year in leading 10 countries amassing a huge toll on marine life, while ratcheting up tensions in the region.

These Days of Nonviolence are an opportunity to celebrate the power and effectiveness of nonviolence and the futility of war preparations in bringing true human security.

Choi Sung-Hee writes in the latest issue of ‘Gangjeong Village Story’ that the recent ROK-US military exercises together with RIMPAC are an integral part of the ‘US  Indo-Pacific domination strategy targeting North Korea and China …’ and are in violation of ‘inter-Korea summit declarations and DPRK-US summit in 2018. These war preparations have continued in violation of calls for a de-escalation given the Covid-19 pandemic and government efforts around the world to deal with the crisis.

Gangjeong has become a focal point of peace learning and nonviolent resistance for many peace activists and religious alike, who are working to move beyond militarism and preparations for war and seek a sustainable future for all God’s creation.

We lament the monstrosity that is the naval base and the enormous waste of resources that ongoing war preparations represent and celebrate the many years of struggle and power of nonviolence in promoting a culture of life and peace in Gangjeong. The destruction of the coastline and sacred gureombi rock and many years of state violence inflicted on villagers and peace activists continues to engender feelings of anger and pain. However, these Days of Nonviolence are an opportunity to celebrate the power and effectiveness of nonviolence and the futility of war preparations in bringing true human security.