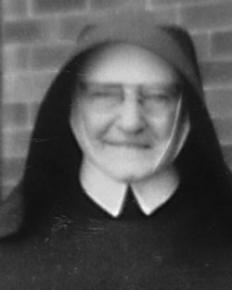 The foresight of the late Sr Campion Roche rsj, who stashed Mary MacKillop’s belongings under her bed and in her cupboards for safekeeping, will be rewarded when strands of Mary’s hair taken from a locket are presented to Pope Benedict as official relics during the canonisation of Australia’s first Saint.

The hair will be presented to Pope Benedict XVI as part of the Canonisation Ceremony in St Peter’s Square. It will be contained in a specially designed and uniquely Australian reliquary – a cross made from Australian red gum from Penola, where Mary was a governess and established her first school house.

The Sisters of St Joseph commissioned Penola sculptor Guy Detot to craft the cross. He has also made two others - one to be kept at Mary’s tomb in North Sydney and one to go to the Mary MacKillop Interpretive Centre at Penola.

Sr Anne Derwin rsj, Congregational Leader of the Sisters of St Joseph, said it is the practice that a relic of the person to be canonised is presented to the Pope during the ceremony. The relic is usually carried forward by the Postulator of the Cause, meaning that Sr Maria Casey rsj will have that honour in the case of Mary MacKillop. “We thought it would be nice to have something uniquely Australian for the reliquary and we had the thought that the red gum from Penola would be nice,” Sr Anne said.

After a day spent exploring the old station at Penola where Mary worked as a governess, Mr Detot found inspiration in some old red gum fence posts on the property. Sr Anne said the sisters were “thrilled” with the end result. The actual hand-over of the hair from Postulator to Sculptor will take place when Sr Maria returns briefly to Australia from Rome next month.

Sr Anne said it is not known who originally took the strands of hair and kept them in the locket, but they have been in the Order’s archive since the 1960s. “One of the Sisters said her family was given it by a Sister who guarded Mary MacKillop’s things – her letters and mementos which were kept after she died,” she said. The Sister who kept guard over Mary’s things was Sr Campion Roche. “She kept a lot of it under her bed and was instrumental in getting Mary’s letters transcribed and pushing for the Cause (for Sainthood),” Sr Anne said.

One of the senior Sisters of the time later recalled the following about Sr Campion’s endeavours to vouchsafe Mary MacKillop’s belongings:

“As novices we were invited to her office to see what had been gathered. Sister Campion opened her treasures which were kept in cupboards with glass doors. There was not much there because I don’t think we valued the thought of keeping things … Among the things we were shown was a little purse, a little box which was not opened for fear that contact with the outside air could destroy or harm the contents – I think this could have been a lock of hair, part of a habit – a sleeve rather out of shape because of Mary MacKillop’s stroke, a book of customs and rules, a pair of rosary beads and I think a crucifix.”

When she died on 29 September 1979 aged 87 years, Sr Campion was remembered as “a woman with an awareness of the importance of history, heritage and tradition; with a vision of a challenging future; but above all a woman with a great capacity for warmth and friendship”.

In more contemporary times, Sr Campion is seen by one Josephite as “keeper of that treasure, custodian of the memories and preserver of the spirit”. Sr Campion’s spirit will no doubt be felt by many during the presentation of the relics on October 17.

Reprinted with permission from Sisters of Saint Joseph of the Sacred Heart.