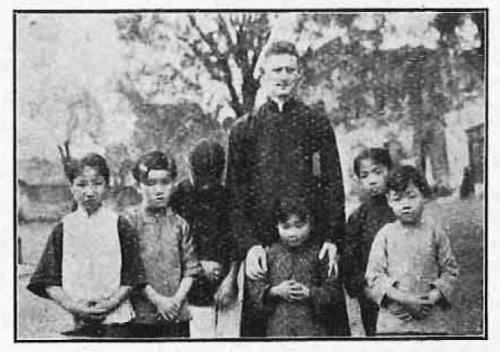 I got such a frite to-day. I thort a teribble aftickshin had come upon me. I'll tell you about it. Down our street lives a man who has a horse - a great, big, white draft horse. He drives it in a cart. Sometimes he passes our place leading the horse to a paddick or to the troft to get a drink. Well, this afternoon, the man gave me a ride. He's a kind man. The horse has a very wide back. I did not fit him well. I think he's O.S. in horses. My legs would not go down comfortibble, over his ribs, they stuck out a bit. All the same, I enjoyed it. I like new expeereensis. But when I got off. Oh,
BOY! That's when I got the dredful frite.

When I got off the horse, my legs felt all bandy and bowleggedy, like a old sailir's. Jingy! I felt sick. It was a fritful sensayshin. At once my imaginayshin - my father said I have an acktive imaginayshin - got to work. I saw myself arriving at school and all the kids larfing at me - espeshilly Dacey and his moony-faced sister. I saw the boys kicking a football through my poor legs, and yelling out - "Gole!" I saw myself presenting myself at St Columban's, and all the other stewdints looking in amaizement at me. I thort perhaps it was a punishment on me for being proud of my legs. Dacey says I have skinny legs, but I have not. I ran home as fast as my stiff legs would allow, I rushed threw the house, alarming my mother. I was afraid to look in the mirrer. But, thank God, it was only imaginayshin. My legs were perfecktly strait, but they felt bandy for a long time after.

I would like to be a good rider. It might be useful to me when I am in China. I've heard of a boy who is a beaut rider. His name is Bill Borthissle, and he lives on a farm near Gunnerdar, in N.S.W. I've been told that he rides down the hills with his arms out and a rabbit in each hand - not holding the rains at all. His mother gets dredful frites. It is a wonder she has not Hart's Diseeze. My mother would have Hart's Diseeze if I did it. But she is quite safe. I could not do it. I neerly rolled off the old draft horse when he comensed to trot. Jig! Jog! I went up and down. Flip! Flop! My father says, when he was a boy they ust call it making pancakes. My father larfed at my account of the ride. He said the old draft horse goes quietly and slowly enough - he's no Pegasis. I think Pegasis was a horse that won the Melbourne Cup when my father was a young man.