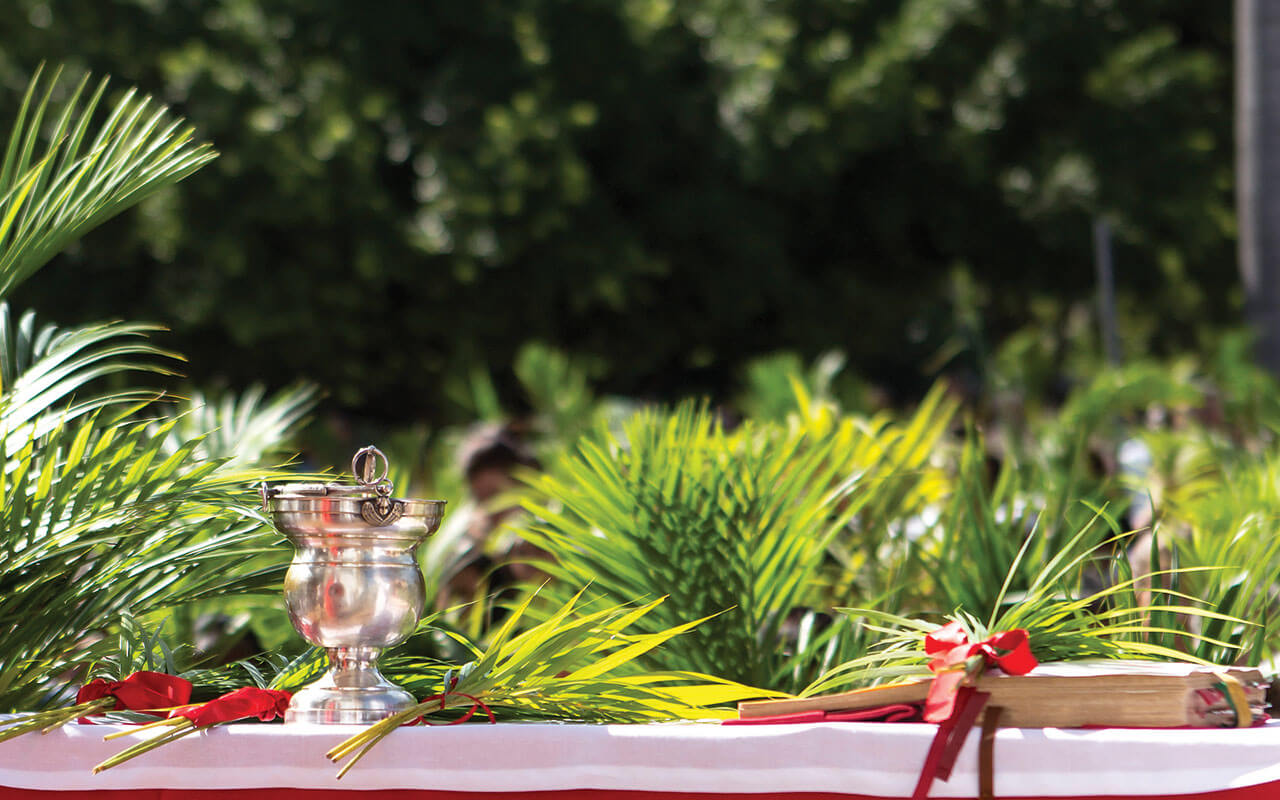 A holy memory from my childhood remains with me. I was 5 years old. I remember going with my father through the mud and slush of early 1950’s suburban Melbourne to St Patrick’s Church in Mentone. Morning, a long ceremony. Much later on, I realized that I was attending the Easter Vigil ceremonies that were then celebrated in the morning of Holy Saturday. Was I as a small child experiencing what the Russians felt when they came to Constantinople in 988AD searching for faith and found it in the celebration of the Divine Liturgy? Who says children don’t know?

Fast forward to Talisayan in 1972, a smallish but mountainous rural parish of 25,000 Catholics in the southern Philippines. After the 3 pm Liturgy on Good Friday the statues of the Passion were outside the Church on small carriages waiting to be drawn in a procession in sadness and tears of mourning through the town.

Each statue was surrounded by its devotees ready to push the carriage, especially the statue of the Virgin Mary draped in black and with her heart pierced by a sword. The carriage with the statue of the Dead Christ was left alone. But, as the procession moved off, several black-clothed men with bowed heads came and began to push this carriage. They were the thugs, the social trespassers, the havoc-makers of the town. The age-old traditional custom drew them to push the carriage and to publicly ask forgiveness from their Crucified Christ and the townspeople. No one in the procession said anything but everyone knew that this was the time of soul-healing and forgiveness. I began hearing confessions in the Church immediately after the procession. After about 9 pm when the church seemed to be empty and was mostly dark, I am sure that it was these same violent social trespassers who came for the sacrament of reconciliation. The town had already forgiven them as they pushed the Dead Christ through the town and now they came to the church to confess and be forgiven by their Christ.

Fast forward again to Easter 1980 in Narowal, a big rural parish in northern Pakistan, up where Punjab meets with India and Kashmir. After three celebrations of the Easter Vigil ceremonies on Holy Saturday night and Masses all through Easter morning, it was then out on a motorcycle for the next eight days of the Easter Octave. Three or four Masses each day, for a few Catholic families in one place and for 100 families in another place. “Thank you, Father, for coming. How could we celebrate Easter without Holy Mass?”

Fast forward again to Easter in the Sindh at Badin in southeast Pakistan in 1985. Most Catholics were agricultural labourers whom the Muslim landlords would allow only one day for an Easter holiday. They were able to come to the Church on Holy Saturday evening and they came in their hundreds with catechumens who would be received into the Church that night and with many seekers and inquirers.

All through the evening and night of Holy Saturday the ceremonies and events from Holy Thursday until Easter were celebrated in one continuous rite, together with catechesis, film, rest periods (we provided everyone with a thin mattress and a quilt as the night weather was always cold at Easter time in Badin on the fringes of the Thar Desert), and a good meal, as was shared by Our Lord with his apostles on Holy Thursday night, and tea.

Everyone’s feet were washed during the commemoration of the events of Holy Thursday, women by the Sisters and catechists’ wives, men by the priests and the catechists. Profound silence, tubs of muddy water continually replaced as most people had walked in bare feet. And later, the lighting of the Easter fire and the Easter Candle with drums beating and fireworks exploding and shouts of joy. And then the catechumens received into the Church with their commitment and promise to present someone else for instruction during the coming year and reception at the next Easter.

Now fast forward to Rome since 2011. Although I have never much cared to go to St Peter’s for the Holy Week and Easter Vigil ceremonies, coming on Easter Sunday to St Peter’s Square at noon with hundreds of thousands of cheering Romans and fervent pilgrims to receive the Urbi et Orbi blessing from the Holy Father is not to be missed.

I much prefer to go to the basilica of Santa Maria Maggiore and join with the ordinary Romans as they celebrate the Holy Days and Easter in “their basilica”. The organ seems to play more loudly, the trumpets seem to blast more joyously, and the choir seems to sing with more gusto and verve at Santa Maria Maggiore to celebrate Easter with the people of Rome.

As a consultor since 2016 to the Congregation for Divine Worship and Discipline of the Sacraments at the Vatican, I think this is about the sensus fidelium, the mind of the faithful, how the people of God in many places and conditions know instinctively that these Holy Days and Easter should be celebrated and know how to celebrate them. Even a little five-year-old boy, many years ago.