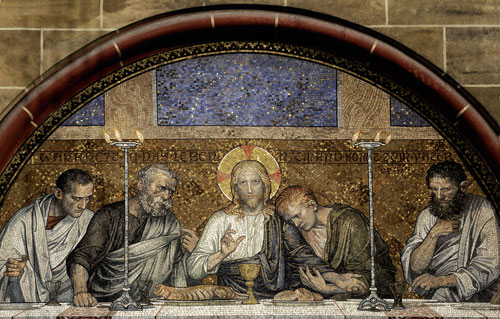 Before we leave on a journey, move house or migrate abroad many of us like to gather with family and friends. We give them a parting gift; something symbolic so our love and friendship will be remembered and our life will be recalled and cherished.  It can be a photograph or favourite book, a recorded video or audio message.

Jesus left no such mementoes by which to be remembered.  He left something greater; He left Himself present to all.

It’s a unique spiritual event through which Christians experience His presence and during which the redemption of humankind that He brought about by his life, death and resurrection is re-enacted and renewed.

During the Eucharist we are called to be true and faithful disciples - to be another Christ. We are called to serve others as Jesus did - helping the poor, lifting up the downtrodden, releasing captives, healing the sick, challenging the causes of poverty and oppression, helping orphans and widows.  This is the way to extend His presence and love in the world - through unselfish service.

It was not by chance that Jesus shocked his disciples during the Last Supper when He began to wash their feet.  This was the work of a domestic servant and Peter refused until Jesus told him he could not be a disciple unless he accepted.

He gave them and us this example of discipleship. This is an important part of the Eucharist, it bonds us to Jesus and to each other in a commitment without asking for rewards.

A true disciple must take an active stand for the truth, justice and dignity of every person.  The Eucharist not only gives us the spiritual power to embrace such principles but the courage to act for and on behalf of the abused, exploited, sick and the hungry.  When this meaning is lost and the Eucharist becomes more of a church ritual than a dynamic call for commitment to community service then we will have empty pews and fewer Christians.

The preaching of Jesus and his compassion for the poor and the outcasts was at the heart of the Kingdom of God. He uplifted their human dignity restored them in the ‘image and likeness of God.’

All were to be treated equally as children of God. That’s the basis of our declarations on human rights as we know them today. When we defend them we are taking a stand as Jesus did.  We take the risks He did.

He paid the ultimate price for his unwavering faithfulness to the Father - death by crucifixion.  The rulers of the day saw Jesus as a threat to their power and authority. Before He was falsely accused, arrested, tortured and executed, He left us the Eucharist.

Food and drink are the essentials of life, spiritual and physical. The symbolism and the reality became one when He and His disciples celebrated the Jewish Passover meal. This recalled the historical deliverance of the Jewish people from the slavery of Egypt when Moses led them into the desert, into a covenant with God.

During the supper Jesus broke the bread and gave it to his disciples and said ‘This is my body which is given for you, do this in memory of me.  In the same way, he gave them the cup after the supper saying, ‘This cup is a new covenant sealed in my blood, poured out for all.’

When Jesus told his disciples and believers to “Do this in memory of me,” it wasn’t just a sentimental ritual he left, but a memorial of his life, death and resurrection. That is why reading and reflecting on the Gospel account of His life is so important. We are called to imitate Him, “to put on Christ” as St Paul says and be doers of the Word and not just listeners.

The Eucharist is the moment when Jesus is present among us, inspiring us to go out and preach his Word and fulfil his mission.  We can’t be true to Him if we don't bend down and “wash a foot.”

Through faith in Jesus Christ we are one with God. When we break the bread and share the cup we celebrate this and commit ourselves to imitate Him and continue His mission to transform the world.  Above all, the Eucharist is the living presence of Christ who is always with us.

Fr Shay Cullen SSC has been a missionary in the Philippines since 1969.