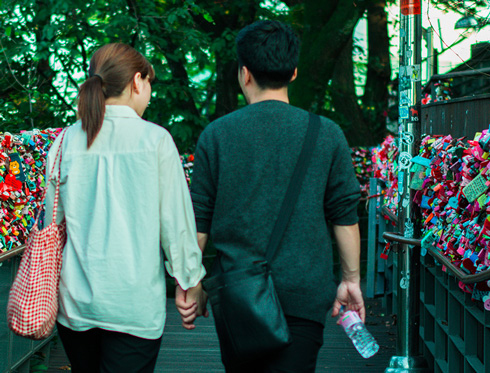 It was Christmas Eve night and Fr. Charlie O'Rourke was alone in the rectory in his parish in South Korea when he thought he heard a knock on the back door. "No, I must have imagined it" he mused, "because the parishioners always come to the front door." However, when he heard a second knock, he went to open it, despite feeling uneasy.

Standing outside in the dark, a stranger introduced himself as Joseph. "Then, I'm assuming your wife is Mary!" Fr. Charlie replied with a small grin and a large degree of scepticism. "Yes!" said the stranger, obviously surprised and delighted, and with that a woman stepped into the narrow shaft of light. Since Fr. Charlie didn't recognize either face, he felt unsure, but conscious that it was Christmas Eve, he decided to invite them inside.

Sitting around the kitchen table, he quickly learned that they were a husband and wife who, displaced by war, had recently settled in a village on the outskirts of his parish. They were the only Catholics in that village, and had come to request Fr. Charlie to celebrate Mass there for Christmas. "The villagers are curious to learn about the meaning of Christmas" they assured him, "and they will become even more curious when they hear a foreign priest explain it to them in their own language!"

They saw in the lives of those newcomers to their village what it means to serve God and to care for one’s neighbour, and they wanted to follow their example.

The next day, Christmas Day, a large group of curious villagers gathered to listen to Fr. Charlie as he explained how God loves people so much that he sent his only Son, Jesus, as a baby, in order to show us by the example of His life how we can truly serve God and care for our neighbour.

At the close of the Mass, Mary announced that if anyone in the village wished to learn more about the Christmas story, she was available to teach and guide them.

Fr. Charlie returned to that village from time to time to encourage and support Mary and Joseph's outreach and catechetical efforts. Then, eighteen months later he was asked to come to celebrate baptism.

On that occasion, to his astonishment and joy, forty people were baptized. They had welcomed the Good News not only because of what they had heard from Mary and Joseph, but more importantly because of the way this couple lived the Good News. They saw in the lives of those newcomers to their village what it means to serve God and to care for one's neighbour, and they wanted to follow their example.