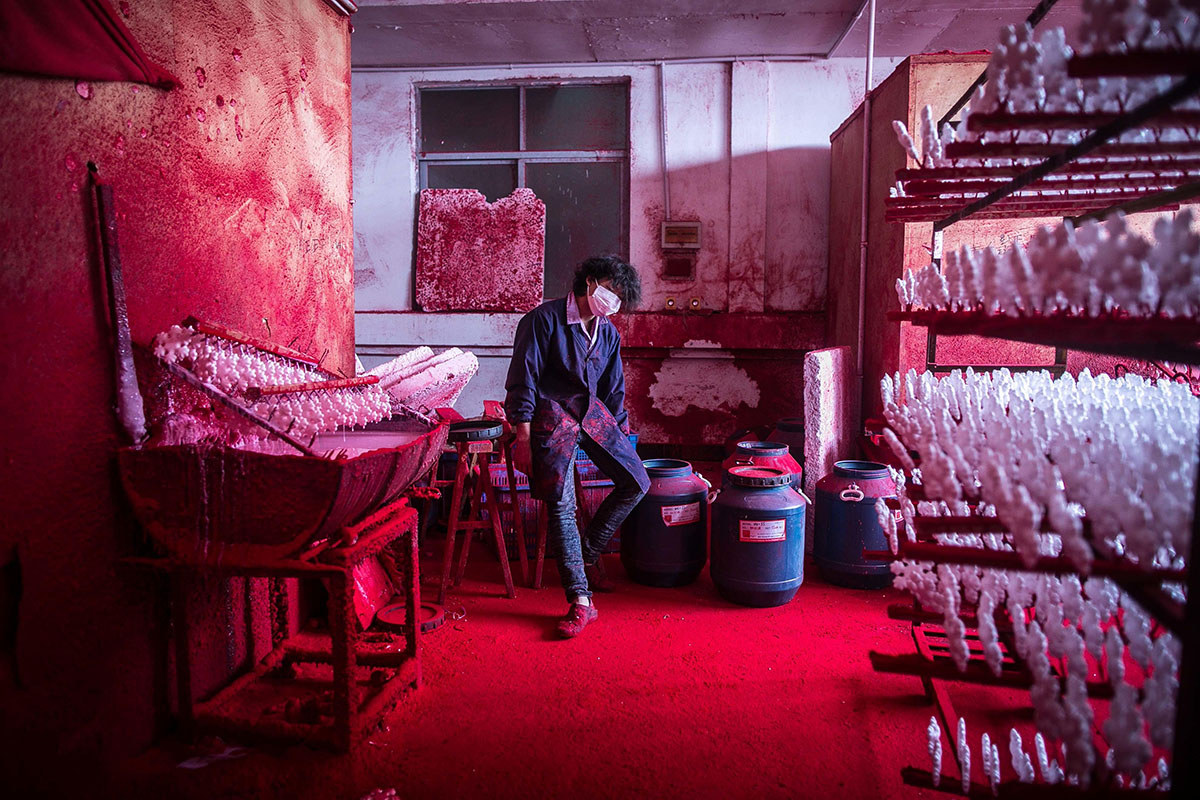 19-year-old Chinese worker Wei wearing a face mask rests next to plastic Christmas snowflakes being dried as the red powder used as colouring hovers in the air at a factory in Yiwu. Photo: Imaginechina Limited/Alamy

“Ask about the labour, not the label,” Australian troubadour, Dermot Dorgan, says in his award-winning song on responsible consumerism.

The same question can also well apply to the tinsel and flashing lights we buy to put on Christmas trees, or the Santa costume that the jolly bearer of gifts dons while doing his rounds.

But while “Christmas comes but once a year” may sum up the festive season in most parts of the world, the village of Yiwu in China has made it an all year round affair.

Sixty percent of all the world’s Christmas decorations are made in what has been dubbed the Chinese Christmas Village, as are 90 percent of all those that bear the Made in China label. However, while the elves labouring in Santa’s North Pole workshop may be a happy lot, for the hapless labourers in China’s Christmas village, it is quite a different story.

Photographs show Chinese migrant workers sweating it out in harsh conditions producing cheap decorations for a festival that they know nothing about.

Two of the busiest times of year are April and September. In April, representatives of foreign importers flock to Yiwu to inspect the latest offerings at a giant wholesale industrial estate—measuring some six Melbourne Cricket Grounds in area—and make their orders.

Then September is the deadline for exports to leave the village and head for the shipping ports of Shanghai, Hong Kong and Xiamen.

Business hots up again in October as the domestic orders begin to come in, stretching the peak season right up to December 25. There is then a bit of slack in the schedule until preparations for the following year begin.

One young worker told a foreign reporter that he does know that Christmas is some kind of western festival and even though he does not know what it is all about, he will celebrate anyway.

The reporter says, “At first glance, the Chinese Christmas Village seems to be a place full of Christmas celebration; but in fact, it is a place that only regards Christmas as a business to celebrate.”

She adds that actually, the people do not care what Christmas means. “They just know that Christmas will bring them financial profit and thus it is about an industry, the production of related products and earning commercial profit.”

However, a long production line separates the giant wholesale estate from the raw material. Families labour at home designing and producing items big and small for little profit, while others spend long days in often makeshift factories churning out Santas, lights, cards and even cribs.

The reporter notes, “In Yiwu, faith lags far behind the speed of the market; a godly holiday has suddenly turned into a money-making opportunity. Unfortunately, this mood is not confined to the small commercial street in Yiwu; it has flooded the entire society.”

In his message for the World Day of Peace 2015, Pope Francis talks about the responsibility of consumers in the market.

In Australia, restaurants, shopping malls, churches and even our homes are littered with cheap and junky tinsel, shiny balls and glittering lights, most of which have a short life span before finding a permanent home in the rubbish bin.

With China being such a big supplier, it is a fair bet that most of our Christmas decorations come from the village of Yiwu, where they are made under sweatshop conditions. And, if they bear the label Made in China, it is almost a certainty.

“Every person ought to have the awareness that purchasing is always a moral—and not simply an economic act,” the pope says.

Not only that, he adds that organisations, the Church included, have the task of awakening consciences and promoting whatever steps are necessary for combating and uprooting the culture of enslavement.

So the next time you are after a bit of cheap, junky tinsel or a few lights to brighten up your life, it may well be worth at least asking about the labour and, even if you cannot find the label, at least question yourself as to why they are so cheap! It can be part of making Christmas holy.