Returning to mass in Wuhan 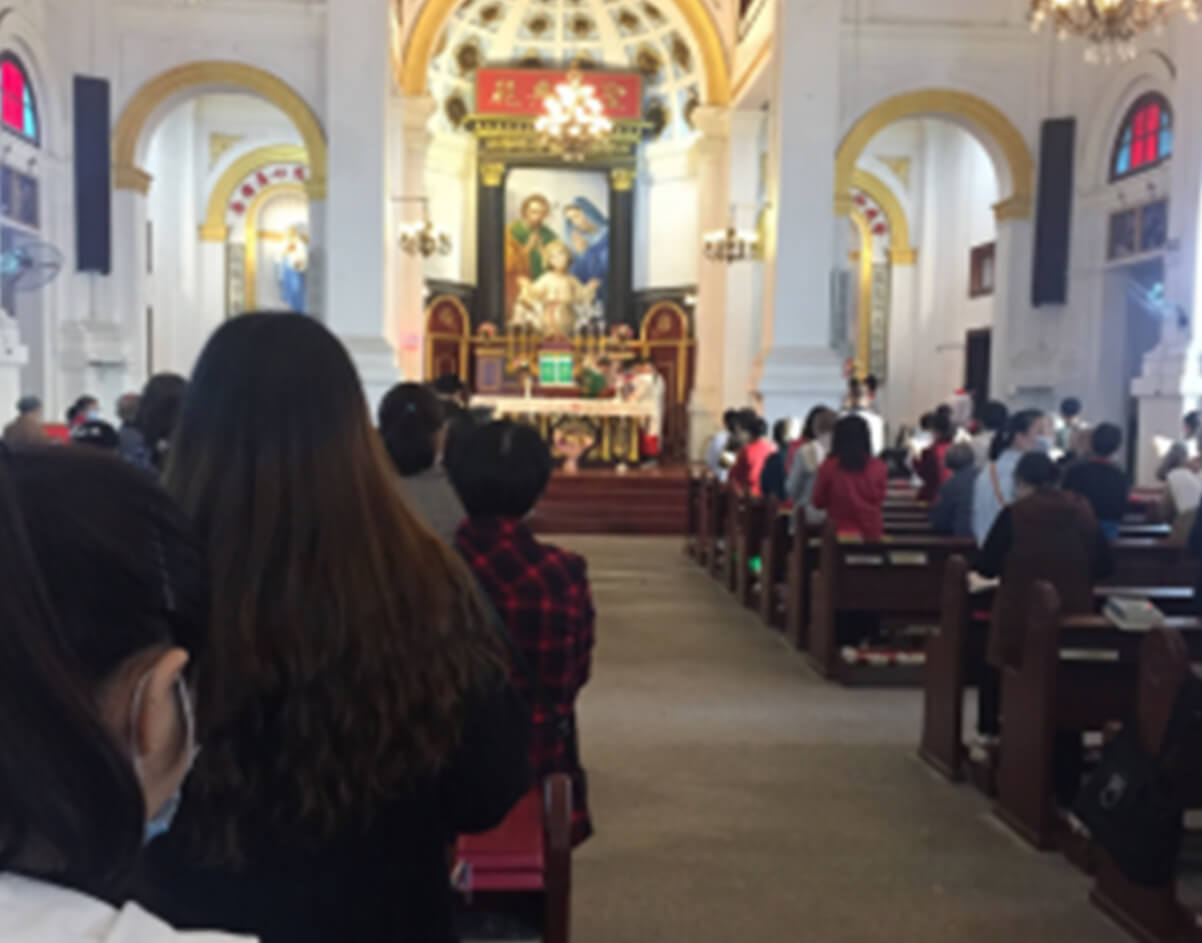 Three familiar smiling faces at the gate of Holy Family Church in Wuhan greeted those who arrived there recently for Sunday morning Mass. Over the course of a year and more, the pandemic had changed so much for all of us, their presence was an indication that the liturgical life of this parish was returning to normal. Sitting on the concrete road, they gave attention to all who passed by in the hope, as before, of encouraging a charitable donation before Mass. Looking at them, my imagination was stirred to consider what disruption may have been brought upon their vulnerable lives during the pandemic. Their Sunday morning presence confirmed what was likely to be experienced a few moments later in the churchyard, a place alive with activity as people greeted and chatted before attending the Chinese Mass.

A few minutes before the Mass began the parish priest announced a number of health regulations that needed to be observed, a setting where the reopening of the church had become official following a month when Masses were celebrated as cautious preparation on a trial basis for a return to normal life. Facemasks and required spacing between worshippers were observed even though China had almost completely eliminated new Covid-19 infections in Wuhan, the main exception being cases that emerged among those who are in quarantine for two weeks at hotels near the airport upon their arrival to the country.

The energetic singing of hymns and the presence of kind friends yet to be greeted seemed like a steady flow of reminders of what the community had missed during the months of pandemic control. As the concluding hymn was nearing its final moments, a woman approached me with the news that her daughter-in-law was due to give birth to twins later in the week and that prayers would be appreciated, their safe arrival presumably meaning that she will be busy in her role as a grandmother for the next few years as is normal in the rearing of children in China.

As people moved outdoors, the churchyard became a busy place once more as friendships were renewed and news was exchanged. A meeting with a woman who lost her 58 year-old husband due to the virus was a humbling experience as she spoke about how good a person he had been and how he had hoped to become a Catholic following his upcoming retirement, all in the midst of a situation where their daughter had not yet been able to return from overseas.

At a side door of the church five members of the international community waited patiently for the parish priest to emerge to inquire about the possibility of resuming their weekly Mass in English or French. The eventual emergence of the parish priest brought the news that there was a need to wait longer before local health regulations allow for the current liturgical schedule to include their Sunday celebration. Having arrived to the church as delegates of the international community, they received the news gracefully and then moved to the nearby grotto where they offered prayers as a group for their members in Wuhan, aware that their intentions about resuming the Sunday celebration had been communicated and would hopefully bring a positive response in the near future.

The curious and comical diversity of all that can happen at a parish church arrived when a parishioner walked by and slipped a mooncake into my hand without slowing his walk, a move that happened with minimal comment and the efficiency of a well concealed rugby pass.

For many of the people at this parish, the opportunity to gather on Sunday to pray as a community is a central part of their lives. Many of them have lived through the major events of China's recent history. Even those who are just 50 years of age were familiar with a restricted availability of food in childhood. Such difficult experiences in previous times seem to provide Chinese people with the resolve to meet the ongoing challenge of the pandemic in a calm but cooperative way. It has now led them to a situation where the virus is actually becoming less of a topic of conversation.

Eventually when I walked down the small incline from the church to the main gate at the road, most people had already departed. Outside the gate was a vacant concrete space where three people had been smiling earlier in the morning. Based upon a previous observation, my assumption is that they had moved to the gate of a church of another Christian denomination in the neighbourhood, another step on the way to recovering their normal way of life. The difference in schedules for the liturgical celebrations on Sundays in this area of Wuhan facilitates their ecumenical undertakings, all part of the wide fabric of life where God can bring people together through the mysterious threads that link all of humanity.