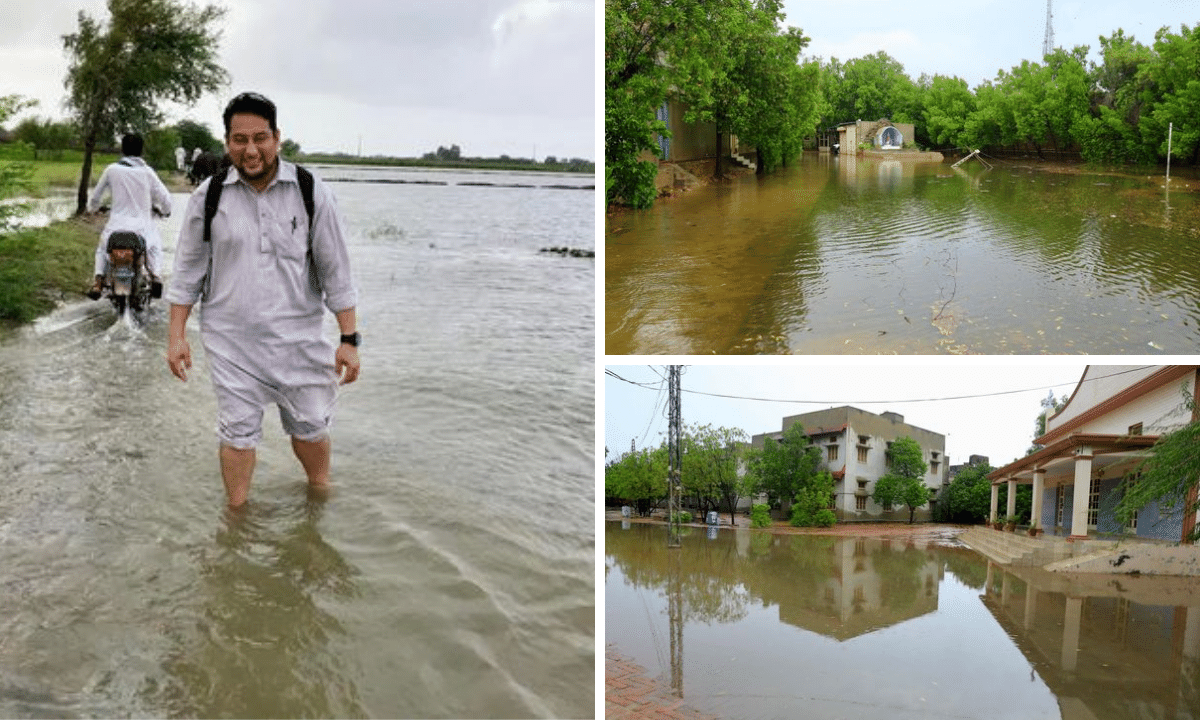 2022 has seen one of the worst monsoon seasons in Pakistan in decades. The rain started in June and is still continuing. The Government has declared a national emergency, saying that over 30 million people have been 'badly affected'. According to the National Disaster Management Agency (NDMA), 1,136 people have lost their lives, and many more are injured; over 220,000 houses have been destroyed, and over 500,000 more homes have been damaged. Over 4,000 km of roads and more than 200 bridges have been damaged, making getting aid even more difficult. The economic losses are estimated to be over $10 billion.

While all of Pakistan has been suffering, Sindh and Baluchistan provinces have been the worst affected. They experienced 522% and 469% more than average yearly monsoon rain. The Met Office said Sindh received 680.5 mm of rain since July, whereas it would typically, on average, receive 109 mm.

In Sindh, most of the province is currently underwater. The disaster agency for Sindh said about two million acres of cultivated crops have been wiped out, and many hundreds of thousands of livestock have been lost. This will lead to food shortages and food inflation over the coming months.

In the Columban-run parish of Badin, about 100 km SE of Hyderabad, in the Sindh province, the danger from the floods has been substantial. The parish is home to people of the Parkari Kholi and Sindhi Bheel tribal groups and the Punjabi community. Columban Fr Pat Visanti, after doing an initial survey, estimates that seven houses have been destroyed, a further 55 partially damaged, and over 100 families in sudden unemployment require food rations. It is a dire situation and will take a long time to recover.

Germanwatch, which does an annual Global Climate Index, rates Pakistan as the eighth most vulnerable country to climate change in the world. This is based on their research over 20 years (2000-2019) which shows 173 extreme weather events in that period, leading directly to the deaths of over 10,000 people. In my experience here, the summer temperatures have been increasing steadily over recent years, beginning earlier and extending into October. Equally, the monsoon season has become more unpredictable, and with more torrential downpours, we have also experienced unseasonal rain in March/April, which has done considerable damage to the wheat crop near to harvesting.

Pakistan has a lethal cocktail of climate change effects - increasing temperatures, up to 50 degrees Celsius at times, unpredictable monsoon rains and glacial melt in the northern Himalayan mountain range. This year, all three have combined to devastating effect. After a relatively harsh and cold winter, spring was effectively missed out as March was one of the hottest on record and by April, we had a full-blown heatwave, lasting over a month, right across Pakistan, India and Bangladesh. What is particularly worrying is how early it began. The monsoon season started in mid-June and is ongoing. In northern Pakistan, in the Himalayan range, there are 7,532 glaciers, more than anywhere else outside of the Polar Regions and they are melting at a greater rate than before.

Despite the undeniable evidence of the effects of climate change in recent years in particular, there is little awareness or action on it from the Government level right down to citizens (with some excellent exceptions). It is not really on the agenda. Combined with poor development and use of resources, rampant corruption e.g. building allowed on flood plains and a fast growing population of about 230 million, the country is particularly poorly equipped to deal with the climate change cocktail mentioned above.

However, Pakistan in line with all countries severely affected by the effects of climate change, has only contributed a miniscule amount of greenhouse gas emissions which are the prime cause of the problem. Unfortunately, in our very unfair world, it is those who have done the least to cause the problem that bear the brunt of the consequences of the climate crisis. There is a moral responsibility on the big polluting countries - the US, China, Russia, European Union Japan - to reduce their emissions.

It is utterly frustrating how poorly most countries are implementing the commitments to the Paris Agreement in 2015. On top of that, Covid and the Russia-Ukraine war have caused further slippage in honouring climate commitments. A few short months later this year, two crucial international meetings are taking place - COP27 on climate change in Egypt and COP15 on Biodiversity in Canada. We desperately need deep commitment from Governments to reach the set targets. The almost never-ending list of extreme weather events happening continually across the planet in recent months demands urgent action from all of us, and particularly the Governments of the world who will gather in Egypt and Canada, before it is too late.

Fr Liam O'Callaghan is the Columban Coordinator for Justice, Peace and the Integrity of Creation in Pakistan. He lives in Hyderabad in Sindh Province.