Mission begins - Faith on a hillside 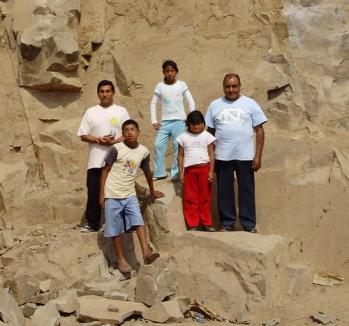 Lima is a city which has grown rapidly over the last 50 years from around 1,000,000 inhabitants to nearly 9,000,000. Thousands of new families are still coming in from the country or moving out from overcrowded inner suburbs. There has been no overall city planning, with the result that the newcomers quickly buy or simply squat on empty lands, no matter how barren, sandy, rocky or sloping they may be.

Almost overnight hundreds of new reed matting huts spring up and a new human settlement has begun. Often it is beyond previous settlements, so at first it has no water, sewerage, lighting or roads, let alone a school, medical centre, community centre or chapel.

For more than 50 years Columban missionaries and Associate priests have been devoting their time to these new and poor settlers. Great emphasis has been placed on inviting the newcomers to share actively in forming a new Christian community.

Over the past 10 years the Columbans have encouraged committed youths and adults to go out each Sunday from their own parishes to new fringe settlements. Formation courses on the Scriptures, theology of God’s kingdom and daily living have been provided for these people, who are known as “Columban missionary fellow-workers.” They have become truly missionary disciples. The word of God as proclaimed through the Scriptures and enriched by Catholic tradition is at the heart of their mission.

Usually they gather the people in the open air or in some provisional shelter, where they can lead the liturgy of the word of life, explain it as applied to daily life, and distribute the Bread of Life. Others may start up classes of preparation for baptism, first communion and confirmation, inviting local people as well to get involved in that ongoing mission. As Paul says to the Corinthians, the body of Christ has all kinds of different members with different ministries entrusted to them.

Three years ago I was happy to be invited to celebrate a monthly Mass in one of those little emerging communities at Las Laderas just north of Lima city. Las Laderas means “the hillsides,” an accurate name for the sides of some Andean foothills where these newcomers have set up their new homes. The Christian community there had been started by a Columban fellow-worker, Genaro Choque.

Genaro went from door to door inviting the locals to come along each Sunday for a liturgy of the Word and Communion. Later another fellow-worker, Laura Marqez, from a parish where Columban Fr Dermot Carthy is pastor, joined Genaro each Sunday to share her faith with the children. I found that they had gathered about 30 people in a flimsy temporary chapel on borrowed land. Within a year I was thrilled to find that they had managed to obtain a few hundred square yards of a rocky hillside, on which they had already erected a light wooden chapel.

Some of the local people were also involved in organising a Bible group, liturgies, baptisms and a choir. One strong grandpa, Augustino, was devoting much of his week to belting away with a sledge hammer at the rocky hillside to level more ground for an extended chapel.

His son Augusto with wife Marilyn are also constantly helping to strengthen the new community in line with their local parish organisations.

Of great importance is their ability to involve these Catholics in the wider community projects to work together to have roads, light, water and sewerage, schools and health services, established.

Genaro kept going to that community until a few weeks before he died of cancer. His apostolate was continued by another two fellow-workers, Victor Araoz and Georgina Barrientos. They prepare children for First Communion and the youth for Confirmation. In early December their efforts were rewarded as the groups received those sacraments in the presence of many relatives and friends. Fr Bernie Lane had the joy of conferring Confirmation on behalf of the bishop.

Some of the youth just confirmed want to become pastoral agents among their local community. The Sunday congregation has grown to around 70 people, with fresh enthusiasm to raise funds to extend their chapel. We are confident of being able to hand over full responsibility to this vibrant “faith community” and their local pastor.

Our little team of fellow-workers will then be free to move on and accompany some other group of newcomers on the outskirts of Lima. 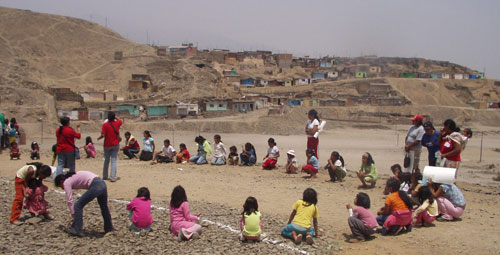