From the Director - The Company of Saints 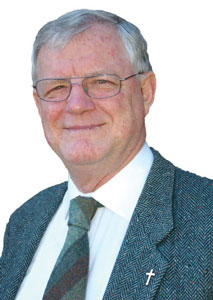 During the Columban General Assembly in Los Angeles in September this year, we visited Our Lady of the Angels Cathedral and took a guided tour. The cathedral is modern and only 10 years old. Our visit made a big impression on me. I felt a true connection with the 'communion of saints' and looked forward to the great feast days that we celebrate in November of All Saints followed by All Souls Day on November 1 and 2.

In the main body of the Cathedral, huge tapestries adorned the walls. They are magnificent works of art with dynamic larger than life size images of the saints on them. Our guide pointed out saints, old and new: St Anselm, St Francis, St Dominic, St Clare, St Therese of Avila and many more. St Maximilian Kolbe, a Franciscan martyr from the Second World War is also there.

But not only are there images of the saints. Interspersed among the saints are the figures of ordinary men and women, youth and children in contemporary clothes. All the figures in the tapestries are heading in the same direction, down the slightly sloping floor towards the sanctuary and the altar.

As I stood there, I had the thought that if we were at the celebration of the Eucharist and I was waiting in the queue to receive Holy Communion, as I walked down the centre aisle, all the people in the tapestries would be walking with me. I would be accepting Holy Communion, not only for myself but with them.

I had this powerful sense of being a part of the 'People of God' both living and dead, of the saints and the martyrs, the preachers and the teachers, and the ordinary people who lived faith filled lives. And still do.

The Catechism of the Catholic Church says about the Communion of Saints, "Exactly as Christian communion among our fellow pilgrims brings us closer to Christ so our communion with the saints joins us to Christ, from whom as fountain and head issues all grace and the life of the People of God itself."

And for communion with the dead it says, "… the Church in its pilgrim members, from the very earliest days of the Christian religion has honoured with great respect the memory of the dead… Our prayer for them is capable not only of helping them but also of making their intercession for us effective."

The figures in the tapestries are from every part of the world. They tell me that we belong to a world Church. Archbishop Jose Gomez of Los Angeles informed us that the Archdiocese has five million Catholics and that Mass is celebrated in the archdiocese in 62 languages every weekend. Los Angeles is a microcosm of the Catholic Church in the world but many other cities like Auckland and Sydney also reflect this reality on a smaller scale.

The 'People of God' never stand still; as each generation comes to faith, or is challenged not to come to faith, as the Church is wracked by sinfulness and hypocrisy, other people are examples of holiness and honesty. There is always the tension between failure and forgiveness.

What the cathedral in Los Angeles tells me is that we do not walk alone, we walk together.