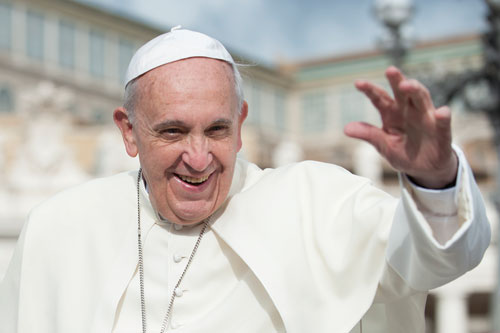 June 18, 2015. Columban Missionaries welcome and celebrate Pope Francis’ newly released encyclical on the environment, “Laudato Si’, mi’ Signore” (Praise be to you, my Lord) On Care for our Common Home.


Columban Superior General, Fr. Kevin O’Neill says of ‘Laudato Si’, “We thank Pope Francis for his visionary and pastoral leadership which invites us as faithful disciples of Jesus to an ongoing ecological conversion. Our lived experience speaks to us as we see the impacts of the exploited earth and exploited peoples. We believe, as stated in our 2012 General Assembly, ‘that we are called to solidarity with marginalized people and the exploited earth (which) are ways we participate in God’s mission’.”

Pope Francis invites us to new understandings, reflections, and actions when he says, “I urgently appeal, then, for a new dialogue about how we are shaping the future of our planet. We need a conversation which includes everyone, since the environmental challenge we are undergoing, and its human roots, concern and affect us all.”

We are reminded in ‘Laudato Si’ of the inter connectedness of the human and natural worlds in these words, “Today, however, we have to realize that a true ecological approach always becomes a social approach; it must integrate questions of justice in debates on the environment, so as to hear both the cry of the earth and the cry of the poor." For Columbans this interconnectedness and solidarity can be found in our own Constitutions which say, “The biblical perspective of stewardship inspires our attitudes and challenges our use of material resources. It should lead to a lifestyle in keeping with Gospel values.”

As pastoral leader Pope Francis calls us into communion when he says, “The human person grows more, matures more and is sanctified more to the extent that he or she enters into relationships, going out from themselves to live in communion with God, with others and with all creatures. In this way, they make their own that Trinitarian dynamism which God imprinted in them when they were created. Everything is interconnected, and this invites us to develop a spirituality of that global solidarity which flows from the mystery of the Trinity.”

Internationally recognized eco-theologian, Columban Fr. Sean McDonagh says,“Laudato Si' is an important step in the Church’s understanding of our human relationship with both the Creator and all of creation. We must continually learn from science, evolve our theology, and humbly situate ourselves in the wider creation story that began with the initial flaring forth 13.7 billion years ago to the world in which we live now and in to the future. We must be open to encounter creation and learn from it.”

Amy Woolam Echeverria, International Justice, Peace, and Integrity of Creation Coordinator for Columbans says, “Having worked for many years in the care and respect for creation as an expression of our missionary spirit, we are filled with hope that Pope Francis’ leadership will energize the entire Church and wider community towards an ongoing ecological conversion. We believe that Praised Be has enormous potential to inspire change in both individual and institutional lifestyles as well as for national and global environmental and economic policies before it is too late.”

Columban missionaries have been dedicated to the care and respect for creation for decades through theological reflection, academic study, sacramental and liturgical practice, grassroots projects, policy advocacy, and artistic expression. Recognizing that care and respect for creation is a universal call which unites people of all faiths, many of whom, inspired by the resources of their own traditions, are actively involved in care for the environment; we commit ourselves to working with them in a spirit of ecumenical and interfaith cooperation as well as with grassroots partners like the Global Catholic Climate Movement and Our Voices.

We wholeheartedly commit ourselves to working with the Church as well as with our ecumenical, interfaith, and grassroots partners wherever we are present to promote and integrate 'Laudato Si' into the work for giving praise and glory to God through our care and respect for our common home.

Fr. Gary Walker, Columban Regional Director, Australia & New Zealand says, Columban Missionaries welcome and celebrate Pope Francis’ encyclical on the environment, ‘Laudato Si’. The encyclical marks an historic moment in the Church as the first encyclical regarding the human relationship with all of God’s creation.

Pope Francis expresses his concern for the future viability of humankind and the planet due to the impacts of human behaviour on ecosystems. One of the most immediate is the influence of global warming. He has given ecological issues a high profile not only to the Catholic Church but to the rest of the world.

In ‘Laudato Si’ 13, Pope Francis says, “The urgent challenge to protect our common home includes a concern to bring the whole human family together to seek a sustainable and integral development, for we know that things can change.” Climate change sceptics will resent the interference of a ‘man of religion’ but others will welcome the weight of authority which Pope Francis brings to the issues around the future of the planet and our human place on it.

Columbans wholeheartedly welcome ‘Laudato Si’ and are committed to working with the local churches, for its wider promulgation and dissemination among all the faithful.