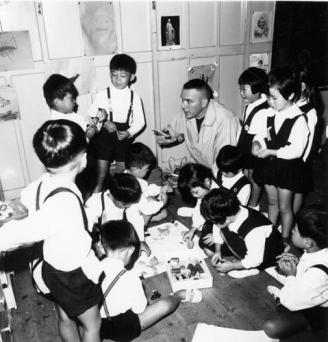 It was a missionary’s dream vacation. During the summer of 1967, a Columban classmate of mine who was on his first six year tour of Korea and I on my first term in Japan decided to fly down to the Philippines to visit our Columban classmates and confreres. Little did we imagine that it would bring us within two minutes of meeting Our Maker! The trip began well with an exciting week in Manila followed by a wild ride on a commercial bus to Olongapo to visit friends in the Province of Zambales near Subic Bay, a huge U.S Navy port in those days. The bus drivers on the Victory Line seemed to compete for passengers by racing one another and passing in what I thought were dangerous situations on the narrow two lane highway.

During the second week of our vacation, we decided to visit the Columbans on the island of Negros, the sugar cane producing island of the Philippines. That visit was uneventful in terms of 'heart in the throat' experiences in the beginning, but it didn’t conclude that way. It was on our way to the airport of Bacolod on Negros that Jim and I experienced the closest call in our lives. A Columban friend, Fr Ed Roberts, offered to take us in his jeep to the airport, about a three hour trip. On the way, we passed through Binalbagan which is a large town with a sugarcane processing mill and a regional hospital.

We were told that another Columban who both Jim and I knew from our days as exchange students in our seminary in Ireland, Fr Mickey Martin, was in the hospital recovering from hepatitis. Naturally we felt duty bound to visit him. That was the key to the rest of the story. Mickey, as any Columban could tell you, is 'a talker'. He has perfected the Irish penchant for telling a story in colourful but in somewhat extended fashion. Consequently we stayed at the hospital far longer than expected.

When we got back on the road and were approaching Bacolod it started to rain and there was more traffic. We pulled up at the tiny airport at 5:32pm to catch a 5:45pm scheduled flight for the 25 minute trip to Cebu. The plane was on the runaway, just 20 or so yards from the gate, the door still open. We had our tickets in hand, but the young man at the gate refused to let us board saying the pilot wanted to leave early because of the weather. Argue as we might, he would not let us through. Somewhat disgruntled, we headed back to town and slept in a hotel.

The next morning at breakfast, the manager came over to our table and said “Weren’t you two priests supposed to be on the last flight to Cebu yesterday evening?” “Yes, we were” we replied.

“We missed it by two minutes.” “Well thank God you did, it was a good thing you missed it because it crashed into the mountain and all aboard were killed.” At first, it was unbelievable that we were that close to being on board that flight killing 21 passengers and four members of the crew. Jim and I looked at one another and he said, “Thank the Lord, Mickey Martin was a talker, or we would be having breakfast with St Peter this morning.”

Later that morning, on the short flight to Cebu, the plane hit a number of air pockets and you would have been amazed to see how many rosaries came out of purses and pockets with everyone making the sign of the cross. We later learned that there in addition to the two 'No Shows' on that fatal flight, Jim and I, there was also one last minute cancellation. It seems that a Filipina lady passenger had seen the passenger list and saw that there were two foreign priests with the names Duster and Duffy scheduled to be on the plane. Since we didn’t appear, she got off and cancelled. Apparently, she thought it was a bad omen that the two priests scheduled to be on the flight did not appear. Call it faith or superstition, but in fact it saved her life. 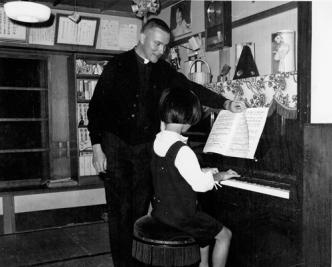 This close call never would have happened in today’s world with such tight airline security and careful screening before boarding, but things were much looser and relaxed in those days.

How close we came to death didn’t really strike Jim and me until later that afternoon when we were reading the accounts and pictures of the crash site in the newspapers. In a sense, it was the most effective spiritual retreat the two of us had ever made. What did I learn from this 'near encounter' with the Lord? I think at least three things. God must have wanted us to be around for a while longer so use the time well was one lesson. Another was if things don’t go as I had planned or expected, maybe God has a reason. And finally, don’t run for a plane or a train or a bus. If you miss it, maybe you were not supposed to be on it and I haven’t done so since.

Columban Fr Charles Duster first served in Japan and later for many decades in Fiji. Nearly 50 years following the crash, he remembers those who perished in his prayers.

Editor’s Note: Philippine Airlines flight #385 crashed into a mountain on July 6, 1967, due to poor weather conditions. All passengers and crew members aboard the flight perished.