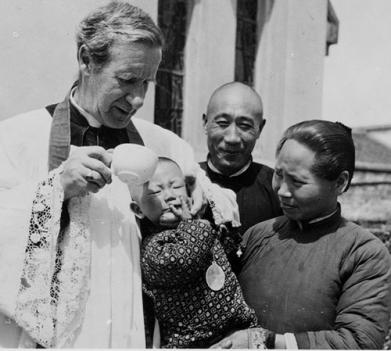 Holy Rosary parish in Brooklyn has a very special significance for the Missionary Society of St Columban. Fr Edward Galvin, who inspired the founding of the Society, served in that parish as a newly ordained priest from 1909 to 1912.

Fr Galvin was ordained in June 1909 at St Patrick’s College, Maynooth, Ireland, for the Diocese of Cork. Shortly before his ordination he was advised that the Diocese of Cork had no place for him at that time. So he applied to the Diocese of Brooklyn and was appointed on a temporary basis to Holy Rosary parish in July 1909, where he served as assistant priest until he left for China on February 28, 1912.

Fr Galvin’s decision to go to China did not come out of nowhere. Even before he began his studies for the priesthood Edward Galvin had expressed an interest in being a missionary priest.
The idea of foreign mission was promptly discouraged by his parents and apparently soon forgotten by the young man. But his interest in overseas mission was suddenly revived by a priest who visited Holy Rosary presbytery in January 1912.

At the dinner table that day Monsignor James McEnroe, the Parish Priest, introduced the visitor to Fr Galvin as Fr John Fraser who was a missionary in China and was looking for priests to go to China with him.

Fr Fraser spoke of the squalor and misery of people in China and their lack of knowledge of God. After dinner when Mons. McEnroe said goodbye to Fr Fraser, Fr Galvin invited the visitor to his room.

The conversation was brief. Fr Galvin spoke: “I’m a priest ordained for the Diocese of Cork. Cork did not need me. I was loaned to Brooklyn. Brooklyn doesn’t need me. You say China needs me. I will go to China with you.”

Fr Fraser was due to return to China from Canada on February 28. Fr Galvin immediately began preparations to join him. It meant beginning to close down his activities in Holy Rosary, and more painfully, it meant writing a letter to his mother to break the news he would not be returning to Ireland. That letter would surface many years later at Holy Rosary's 125th anniversary celebrations.

In preparation for that celebration, Mons. Paul Jervis, the current Parish Priest, invited all priests who had served in the parish to take part. I was invited to represent the Columban Fathers.

The Mass of celebration was scheduled for 9:00am on Sunday October 26, 2014. I arrived at the church at 8:15am so I had time to look around before the ceremonies began.

On the side wall at the back was an illuminated bronze plaque with an engraving of Bishop Galvin’s face, and a list of the significant dates in his life, including “Curate – Holy Rosary, Brooklyn, 1909-1912.”

Beside the plaque on the wall was a large green-paper collage of words and photos showing Galvin’s career from Ireland through Holy Rosary to China. On a table was an open loose leaf binder which followed developments in Galvin’s life at Holy Rosary and afterwards.

Bishop Nicholas DiMarzio, Bishop of Brooklyn, presided at the Mass, and he was accompanied by a deacon and seven priest concelebrants. The all-female choir was impressive as it showed its ability to provide volume, feeling or both at the appropriate moments.

During the opening hymn the Bishop led the concelebrants to the Galvin corner at the back of the church, where he blessed and incensed the plaque, and prayed that Bishop Galvin would continue to inspire the people of Holy Rosary to reach out to others as an expression of their love for God and neighbour.

After communion, Mons. Jervis introduced me and invited me to read to the congregation the letter Fr Galvin had written to his mother to break the news that he would not return to Ireland but would continue on to China as a missionary priest.

Before reading the letter I spent a few moments explaining how Fr Galvin came to be in Holy Rosary in Brooklyn, and how significant it was that he would not return to Ireland as expected, but would continue on to China.

The letter was particularly significant for this Holy Rosary congregation because the letter was written in the rectory of their parish. The letterhead read, “Holy Rosary Rectory, 141 Chauncey Street, Brooklyn, New York.” It was dated “February 28, 1912,” the very day that Fr Galvin left Holy Rosary for China. It began, “My dear Mother,” and concluded, “Goodbye Mother. I will write very soon again. Your loving son, Ed.”

Monsignor Jervis said the letter would help the people understand that Fr Galvin’s missionary decision was a painful sacrifice for him and for his family as they tried to do what they
believed God was asking them to do.

After Mass many people came to me to tell me how moved they were to hear Fr Galvin in his letter trying to console his mother for the sacrifice they both were making to do what they believed God was asking of them.

Reflecting on my experience of that morning at Holy Rosary in Brooklyn, I was genuinely surprised that Fr Galvin is so well remembered there despite his departure more than 100 years ago. Mons. Paul Jervis was enthusiastic about Fr Galvin and wanted the people to continue to honour and imitate him. Bishop DiMarzio was familiar with Bishop Galvin’s history, and referred to him as 'a martyr'.

Clearly Holy Rosary church in Brooklyn will continue to have special significance for all Columban missionaries, because it was there that Fr Galvin’s missionary vocation came to full maturity. From there he left for China and from China he inspired other young priests to join with him in laying the foundation of the Missionary Society of St Columban in 1918.

Since that day in February 1912 when he left Holy Rosary rectory for China, Fr Galvin has enabled more than 1,100 priests to join the Columbans and has inspired many others, lay people and religious, under the patronage of St Columban, to join in the splendid cause of sharing the good news of the Kingdom of God in China and throughout the whole world.

Columban Fr John Marley lives in Ireland. He previously served in Chile as a missionary.