Columban Sr Angela McKeever writes about her ministry at a jail in Santiago, Chile, which can be a dark place but where hearts of stone can sometimes change enabling some to walk in the light of God. 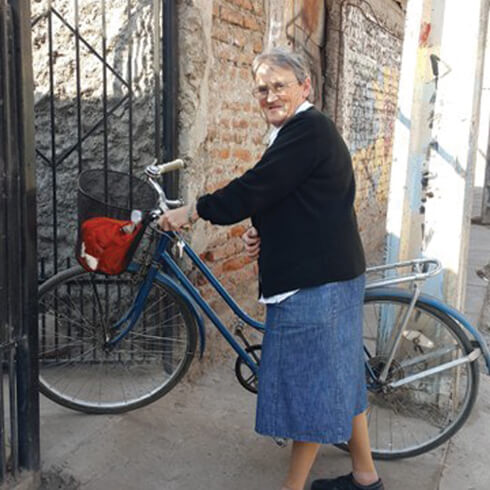 I have just completed 40 years in Chile and for 25 of these I have been going to the oldest jail in Santiago called the 'Peni', pronounced 'penny'.

It was built almost 200 years ago for 500 men. Today there are 5,000 prisoners and two years ago it had gone up to 7,000; so you can imagine the problems caused by overcrowding.

Most of the inmates are addicted to drugs, drink, money and sex. Most have nothing to do all day except smoke drugs, make arms or 'spears' to fight one another, or talk on their mobiles. The law of the jungle is strong. He who has robbed most, the biggest drug dealer, or he who can wound or kill is the one who dominates the section. Many gangs are formed within the prison, so if you do not fight, you face hospital or the grave.

At the same time there are many signs of solidarity and prisoners do help each other, as one guard, who had worked for many years in jails, said to me, "Jail is a mini-world, where there is good and bad".

The only real help for them to think about change comes through the Catholic or evangelical churches. All have their pastoral agents working inside, and we have the privilege of going into the yard where they are and into their cells.

It is extremely difficult for most of them to change as crime is a way of life for them. Many have never worked a day in their lives, as their other 'work' provides them with much more money than working for other people.

To see men or women in jail who are over 60 or 70 is sad, but all their lives they have been offenders. Sometimes you meet whole families who are involved in crime and sometimes you meet just one delinquent in a family with the rest all working for a living.

One woman I met was in the women's jail at the same time as all of her seven sons were incarcerated. When her children were young she was abandoned by an alcoholic husband.

One day going into the section for homosexuals, I met Miguel and I started talking to him. He told me he was there for robbing, which had a lot to do with his drug taking. He had been living on the street as he had lost his family, work, etc, because of the drugs. I asked him, "Would you not like to give up drugs?" "No", he said, "I love my drugs". I had with me the Narcotics Anon (NA) booklet, 'Just for Today', meditations for every day of the year. He said, "Let me see what it says for my birthday".

The theme of that day was 'surrender'. He handed me back the book and said, "Surrender, never!" In spite of all his losses, even the loss of his freedom, he was not ready to blame his drugs which showed how much in the grasp of addiction he was.
Jail is a cruel place, steeped in darkness. We go there bringing some hope and light from the Word of God and also recovery in Alcoholics Anonymous (AA) or NA. At times you do meet some who want to come out of the darkness and change their hearts of stone and walk in the light of God. So we keep on going, keep on hoping and keep on praying for these prisoners.

Columban Sr Angela McKeever is from Ardee, Co Louth, Ireland. She joined the Columban Sisters in 1966 and after her profession, trained as a nurse in London. Most of her religious life has been spent in Chile where she has done pastoral and health work before she became involved in a ministry to prisoners in Santiago.