A pigs head and tail 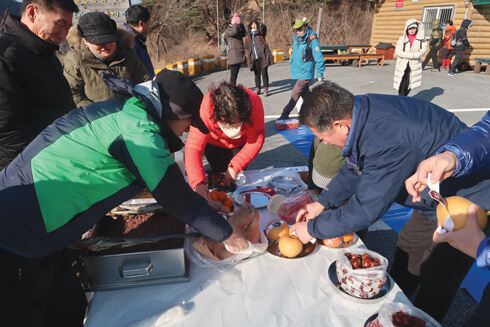 In February this year I visited Korea 19 years after my last visit in 2000. From 1980 to 1982 I had spent two years there doing the Columban Overseas Training Programme as a seminarian. Now some old friends had invited me to return to this mysterious yet very modern country.

I’d heard the country had become one of the most modern and technologically advanced nations in the world and so I wondered if all of the more traditional Korea I had known as a 'shinhakseng' (seminarian) had all disappeared. I didn’t have to wait long to find out.

The signs of modernity were everywhere, including the fast train that whisked me out of Seoul at 220 kph to the town of Osong. In Osong a family I knew from my time on Overseas Training had organized for me to go with them on a bus trip planned by their local Neighbourhood Committee to visit Chilgap Mountain National Park and then on to Taechon.

I was no sooner off the train when we set off on our bus trip. Word soon passed around there was a foreigner on the bus and that he was a Catholic Priest. Of course, I was asked to stand up in the bus and give an insa (greeting) and a choun malsum (some appropriate words). It was 37 years since I studied the Korean language and I had practically no opportunities to use it since. So naturally my Korean language was quite rusty to say the least! But according to Korean custom I had to get up and say a few words of greeting and thanksgiving for the hospitality received no matter how poorly I expressed it. Of course, I received thunderous applause!

So I was quickly discovering that even though Korea had modernized to a large extent, many of the old loveable traditions and customs were surviving quite well. More was to come! 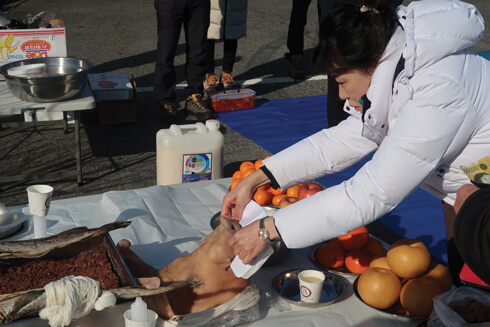 We duly arrived at Chilgap Mountain and everyone alighted from the bus. The sun was shining but still it was freezing as it was the middle of a Korean winter. A plastic mat was laid on the frozen ground of the car park and a low altar placed on it. Then with great fanfare a pig’s head was pulled from a bag and ceremoniously placed on a plate on the altar. All the people, regardless of religion, even the Christians along with the Buddhists and Shamanists, performed a profound bow in front of the pig’s head. I was the only exception.

Then white envelopes containing seemingly generous donations of money were stuffed into the pig’s mouth.

According to traditional Korean folklore, the pig represents wealth and the act of placing money in the pig’s mouth is a plea from the people to the spirit world for financial security and prosperity.

After the customary bows were completed plates of dok or Korean rice cakes and copious bottles of soju and makkoli (strong alcoholic liquors) were generously shared among all present.

After an hour communing with nature we were again on the bus and on our way to Taejon where it was planned that we would eat at a popular fish restaurant. However, all of a sudden it became apparent that the Neighbourhood Committee members had met a problem and they looked at one another with puzzled and worried faces. The committee president had looked at the pig’s head, now returned to its ceremonial bag, and discovered the money he thought was in the pig’s mouth had disappeared. That money was needed to pay for the planned meal in the restaurant in Taechon!

As they carefully searched for the missing money, trying not to alert the rest of the passengers to their plight, tensions mounted as the bus neared Taejon. The organizers were so desperate they began to silently wonder if the pig had mysteriously developed magical powers and snaffled the envelopes and the money!

They were near despair as the restaurant loomed into sight. Then all of a sudden one of the trip organizers stood up to get off the bus and a big wad of envelopes fell from his back pocket. He’d put the envelopes into his pocket after the ceremony finished but had forgotten all about it after drinking a few glasses of soju, no doubt to keep warm in the intense cold! Everyone breathed a sigh of relief and their spirits revived!

The passengers poured off the bus and headed for the restaurant and the committee president and members thanked the pig for this sudden shower of prosperity and expressed their joy and shouted “Ojingo mogopopshida!” (Lets eat some raw squid!) It was then that I realised I was back in the Korea I knew of old. Some things just never change!

Columban Fr George Hogarty was a missionary in Peru for eight years. He is currently in Australia and will return to missionary work in Chile next month.

Listen to "A pigs head and tail"