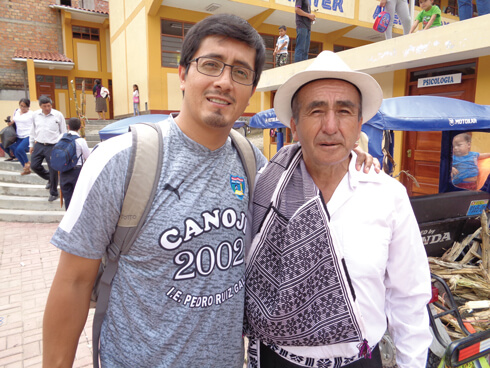 In March this year I was one of a group from the Region of Peru to attend a Columban meeting in Santiago. It was a joint meeting between the Columban regions of Peru and Chile.

Into the room walked a young man, who was greeted with “Aha, Henry has arrived”. On asking who this was, I was informed, “Henry is a deacon”. I had not registered that Henry Amado Serván Vallejos was a Peruvian Columban deacon. Obviously, whenever I had visited Peru, Henry was in formation elsewhere, so we had never met before, nor did I even know we had another Peruvian deacon. So it was great to meet him and get to know him a bit over the next few days of the meeting.

The meeting was a refreshing experience on many fronts, but particularly exciting was being in the company of the future of the Missionary Society of St Columban: Frs Joane Gukibau from (Fiji) , Marco Henriquez (Chile), Gabriel Rojas (Peru), Dylan Tabaco (Philippines), Tavo Palenapa (Tonga), Vincent Ratnam (Fiji) and Henry Amado Serván Vallejos (Peru).

When Henry invited me to his ordination in Lima, Peru, and to his first Mass in his home town of Pedro Ruiz in the mountain region of Peru’s Amazonas, I knew I was in for something very different. I deliberated a few days to think it over and then wholeheartedly accepted the invitation.

In Lima, the day before the ordination scheduled for May 1, we had the great pleasure of meeting, over lunch, members of Henry’s family who had come to Lima for the occasion. Lunch was a very eclectic affair: the menu included Peruvian, Filipino and Korean dishes – like I said above, a sign of the changing face of Columban identity, a sign of the torch being passed on to a new generation of Columbans.

Two moments from the ordination ceremony remain etched in my memory. The first was Henry lying prostrate in front of the altar during the singing of the Litany of the Saints. This is a normal part of the ordination ritual, but what made it different this time was the image of the Risen Jesus above the altar with his arms outstretched, welcoming. Had I not been one of the concelebrants, I would have left my place to take that photo from behind the prostrate form of Henry facing the outstretched arms of Jesus. The other poignant moment was seeing Henry’s parents approaching the bishop, his father carrying the stole and his mother the chasuble that were to be Henry’s vestments.

Later that night, a festive meal was served at the Columban Centre House in Lima followed by music and dancing. Seeing Henry totally at ease dancing with family members and friends was again a good omen for what was to come in his home town of Pedro Ruiz.

Two days later, after a plane ride of slightly more than an hour to Jaén, we took a van for three hours to the outskirts of Pedro Ruiz, located in the Peruvian state of Amazonas. It was already dark when we arrived. The van stopped momentarily and Henry was requested to leave the van and enter Pedro Ruiz in a police car. Talk about a police escort! Other cars tooted horns as we entered the town and then we came to a stop in front of a brightly lit restaurant. A big crowd of townspeople were there with balloons and printed slogans of welcome. Henry was home.

He hugged virtually everyone present and invited them to walk with him to his house. A few of us “oldies” opted to stay in the van for a while. Then, when we reached the modest hotel where we were to be accommodated, there was another huge reception committee, this time with an amplified band. Within minutes of arriving there, Henry was again dancing with his people.

From there we walked together the last few blocks to Henry’s family house. More dancing. I often think of Jesus and his mother dancing at the wedding feast of Cana. Jewish friends of mine assure me that everyone dances at a Jewish wedding.

The first Mass was scheduled for Sunday, May 5, so the next day was relatively free. Henry had mentioned his former school was celebrating a big anniversary and that there would be cultural groups dancing in the streets of Pedro Ruiz and typical Amazonian food available in the school during the day. It all sounded good for a photo op and a chance to rub shoulders, so to speak, with Henry’s community.

Later that afternoon, Henry brought me to the school again, his old Alma Mater, and I was tasting the culinary delights of Pedro Ruiz. It was great just to sit down and observe the people enjoying themselves and to see Henry mixing in with them so naturally. This celebration was the school’s anniversary and nothing to do with Henry’s ordination, but Henry reveled in catching up with friends and former classmates.

Later that evening, back at our hotel lodgings, we Columban visitors to Pedro Ruiz were reflecting on the exuberant reception accorded to Henry on his arrival in Pedro Ruiz after his ordination. We agreed with one of our confreres who saw it as a case of the people of Pedro Ruiz not just celebrating Henry as their priest, but celebrating their own priesthood through baptism. Henry is them. Over these few days of the ordination and first Mass, Henry has shown himself totally immersed in his community. He really is them.

Henry’s first Mass was celebrated in an imposing, if not quite finished, church on the outskirts of Pedro Ruiz, aptly called El Cathedral. It really does look like a cathedral built in the middle of the jungle. We soon found out why the first Mass was scheduled there as we estimated the congregation to be between 600 and 700.

At the conclusion of his homily, Fr Cathal Gallagher, Director of the Columbans in Peru, paraphrased the words of Jesus to Peter in the Gospel of the Mass, “Simon, son of Jonah, do you love me more than these?” Jesus is asking Henry the same question, “Henry, do you love me more than you love your family and community of Pedro Ruiz? Are you ready to leave them and bring my gospel to other communities across the seas?”

But my lasting memories of that Mass, are when Henry said, “Nothing has really changed, I’m still Henry”, and the enormous congregation lining up after the Mass to hug Henry and be hugged by him. Needless to say, the dancing again went on into the night. He really is still “Henry”, and the people in Taiwan, where he ministered on his first mission assignment as a Columban student, must be eagerly awaiting their Henry to return as a Columban missionary priest.

Columban Fr Colin McLean has been a missionary in Brazil since 1985.