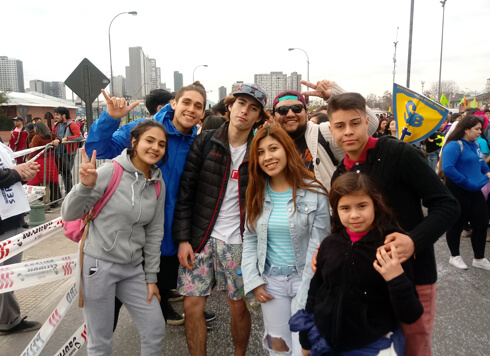 Saturday morning and afternoon in the shantytown

"I felt really sad when I saw what their houses were like.” “They are made of cardboard and tin.” “The children have nowhere to play.” “It is not fair for those children living in those houses. My house is so much better.” “There are babies living there.”

These were some of the reactions of children and youth from San Columbano parish after a visit to a shantytown. In Chile, children preparing to receive the sacraments of First Communion and First Reconciliation are invited to show solidarity with those in need through some concrete activity. Likewise, youth over 15 years, preparing for the sacrament of Confirmation, are also invited to concretely show solidarity with the poor.

On the last Saturday of August, 2018, 22 girls and boys, 12 young adults, ten parents, eight catechists and myself, the parish priest, headed off in a hired bus, to spend the day in a shantytown called, “El Pino” - The Pine.

The El Pino shantytown began six years ago when 50 families illegally moved onto Government land and set up their shacks of scrap tin, cardboard and timber pieces. There is no running water nor electricity and a high level of unemployment. Around 40 children now live in El Pino. An elected committee of El Pino residents is working with the Housing Ministry to hopefully one day obtain decent public housing for the 50 families living there.

In Chile, like elsewhere, there are many prejudices against people who live in shantytowns. They have illegally occupied land. Some people say the residents are lazy and do not go out to look for work. They say that the residents just look for handouts and will not do anything to help themselves. Others say that shantytowns harbour criminals, drug addicts and alcoholics.

In order to help overcome these prejudices, we as a parish felt that a visit to a shantytown for our children and youth in sacramental programmes would be very beneficial for them. Even though the families of the parish are poor themselves and live in a drug and gang ridden environment, the families in the shantytown are still far worse off than they are.

As a parish, we wanted the children and youth to realize that if they are to have an encounter with Jesus Christ in the Eucharist and in Reconciliation and with the Holy Spirit in Confirmation, then they must make a commitment to be in solidarity with those in greater need.

Prior to the visit to El Pino, special collections of food, clothing and toys were taken up at Sunday Masses for several weeks. Letters were written to a large company that produces yoghurt and ice cream asking for donations. Bakeries were also approached to donate bread. We received positive responses from all.

A breakfast of sandwiches, tea and coffee and yoghurt, was offered upon arrival in El Pino to the 40 children and some of the parents who wanted to participate. Then fun and games were enjoyed until lunch. Face painting for the small children was very popular as was manicuring nails for the girls.

A lunch of spaghetti bolognaise was prepared by the adults from the parish on a gas stove used for camping which we brought on the bus. After lunch, it was back to all kinds of fun and games until it was time to leave around 4.00pm.

What were some of the results from the visit?

Later that evening, after the Saturday night Vigil Mass at 6.00pm, I celebrated another Mass at 7.30pm for a large family and their friends, to mark one month since the death of a beloved grandmother, mother, aunt and friend.

The nephew danced in honour of, and gratitude for, the life of his deceased aunt.

After the two Sunday morning Masses, I drove to the other side of Santiago for a special Mass at midday in an ex-Columban parish, in another church of San Columbano. This special Mass was celebrated to commemorate the Centenary of the Founding of the Columbans in 1918. The Church was full with current and former parishioners.

The Mass began with a power point presentation of the history of the Missionary Society of St Columban. After the Mass, another power point presentation showed photos of all Columban priests, associates, seminarians and lay missionaries who had worked in that parish including Irish Columban Bernard Martin, Diocesan Associate Jack Peard from Toowoomba, Seminarian Kevin Bell from Sydney, Dublin Diocesan Associate Enda Lloyd and Irish lay missionary Noranne Hessian.

The occasion finished with an opportunity to share our friendship with sandwiches, tea and coffee. We were then all provided with refrigerator magnets with the image of St Columban.

A family with whom I am friendly had invited me to Sunday lunch, which in Chile can begin from about 2.00pm and go for several hours until the evening.

This is how I spent a most enjoyable and worthwhile weekend.

Listen to "What a weekend!"