Columban Fr Bobby Gilmore asks: Are we in an age in which animals are humanised, humans are animalised and compassion is a crime? 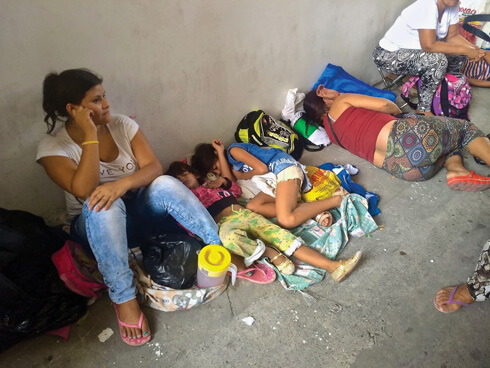 Whoever welcomes you welcomes me, and whoever welcomes me welcomes him who sent me…And if anyone even gives a cup of cold water to one of these little ones, because he is a disciple of mine, I assure you, he will not go unrewarded.” (Mt. 10:40-42)

The claim of a number of political leaders in the recent past to be protecting the Judeo/Christian civilisation has not gone unnoticed. However, when this claim is justified by the rejection of the humanity and self-hood of immigrants and others seeking safety it has the density of cigarette paper.

First, when immigrants are criminalised by equating them with cockroaches, animals, aliens, illegals, rats, vermin and scum it creates a dehumanising attitude instilling doubt and fear in the general public, justifying walls, moats and fences. Essentially, it is saying: immigrants aren’t people.

But more than that, it has created a toxic turnaround of the basics of the Judeo/Christian message central to which is love of neighbour, doing good to others, protecting the weak and concern for the isolated by not just criminalising immigrants but by criminalising those who help them. The story of the Good Samaritan subverted!

In Europe at present, a woman captain of a rescue ship funded by public concern for the weak, was hauled and charged before the court for landing desperate migrants at the island of Lampedusa.

In America a man was arrested and charged for offering food, water, bedding and clean clothes to two migrants who entered the country illegally. Hard to believe that he was freed because a jury was split in regard to his guilt or innocence. Here is an example of how confused people are regarding helping others in need. This man was not aiding and abetting others to commit a crime. He was not selling arms to criminals to be used against innocent people.

In another incident a woman, Teresa L. Todd, a lawyer and public official on her way home from work was waved down by three young people on a lonely Texas highway. She gave them a lift in her car. Just then she was spotted doing so by a local deputy sheriff who called the border guard. Teresa was arrested and detained for 45 minutes while her phone was examined. Teresa said she picked up these young people, two brothers and a sister, because they looked like her own children. She acted out of compassion.

The most recent incident of a father, Oscar Ramirez and his 23 month old daughter Angie, drowning on the banks of the Rio Grande, evoked memories of Alan Kurdi’s lifeless body being brought ashore on a Turkish beach.

Sadly, the anger and revulsion arising from such incidents and indeed many others seems not to translate into national and transnational structural humanitarian responses. What seems to increase is the xenophobic rhetoric of some political leaders and their sycophantic followers which leaves one wondering.

Suppose the man arrested for bringing food, water and shelter was doing so for abandoned cats would he be arrested and charged? Would Teresa Todd be acclaimed rather than arrested if she rescued a few stray dogs?

What would happen if someone on the bank of the Rio Grande threw a lifeline to Oscar and his daughter Angie and brought them ashore alive? Would they be accused of aiding and abetting illegal migration? Would the captain of the rescue boat in the Mediterranean be charged if she had rescued abandoned horses?

If animals deserve rescue, and they do, why not at least accord the same treatment to desperate human beings. Are we in an age in which animals are humanised, humans are animalised, and compassion is a crime? It seems so. John Berger’s words make sense.

The division between the poor and the relatively rich becomes an abyss. Traditional restraints and recommendations are shattered. Consumerism consumes all questioning. The past becomes obsolete. Consequently, people lose their self-hood, their sense of identity, and then locate and find an enemy in order to define themselves. The enemy - whatever their ethnic or religious nomination - is always found amongst the poor. This is where the circular pattern is vicious. (John Berger. Bento’s Sketchbook)