Paul, a young student from Myanmar Higher Education Centre (HEC) thanks those who helped to open his eyes and shape him. 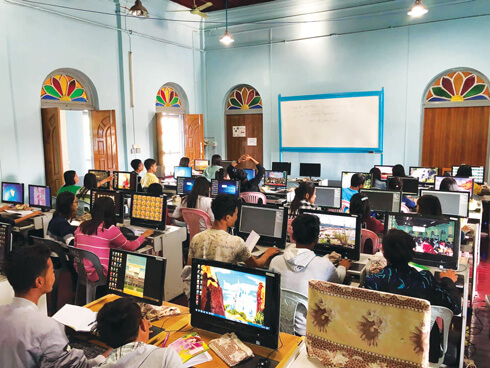 It was in September 2017 that my teacher, Sr Anny, a St Joseph Sister, asked me if I wanted to study in Mandalay. I thought I could be studying in the second biggest city of our country. “Of course, Sister" I replied.

She told me to start preparing for the entrance examination for the HEC, founded by Columban Fr Neil Magill. I started looking for my old English Grammar notebooks and began to study. After two months I was ready. Full of excitement, I left my native village in December and headed to Mandalay.

The way to Mandalay was full of wonders and the two big rivers - the Chindwin and the Irrawaddy. I have only ever seen mountain streams in my village. Soon I arrived at HEC which I hoped would become my second home.

On the following day I heard what I had never heard before. We were told that there would be an English listening test. Never in my life had I listened to any English audio recordings.

In January 2017 I began the new academic year with a special mission: 'Rat Hunting’. Rats were running wild at the HEC because of the absence of the students for three months. Rat hunting was one of my favourite hobbies and I felt at home with my new task. I was the hero of Fr Neil Magill as I had heard he was terribly afraid of rats.

Classes began and the teachers were amazing. The way they taught us was totally different from the public schools. There was no more rote or parrot learning. I did not need to memorize written texts. However, this was when I came unstuck as I was not able to write even a short simple sentence of my own. I had to work very hard on this issue.

Subjects included computers, ethics, grammar, spoken English and ‘listening’ that was taught by a Buddhist teacher who was so graceful in her Myanmar dress. She was one of three qualified Buddhist teachers which I found unusual as the school was Catholic.

Another subject we had was ‘writing'. On the first day of our writing class, our teacher, who spoke Burmese and English, with a strong Chin accent, told us to write a short paragraph on 'My Father'. I wrote 12 sentences altogether. I handed it in and he returned it the next day with a comment, "This is not a paragraph". I made a resolution, to write in my journal every day and my writing skills steadily improved.

A month had passed, but there was still one thing I dared not do - have a conversation with Fr Neil Magill. He was the only foreigner from European countries I had ever seen in the flesh. Many a time I decided to speak with him and I had memorized several phrases and sentences to use, but each time I approached him they vanished like summer clouds.

Once, I came across Fr Neil at one corner of the school building and he greeted me with, "Good morning, Paul". My response was no more than repeating his words, "Good morning". How I wish I could have had a longer conversation with him. I am sure he knew that my English was far more than "Good morning” as he was our Spoken English teacher.

On another occasion, when I asked permission to go to the bank to draw some money for a school contribution, he said to me, "Are you bringing a gun with you?" My prompt answer was "Yes". I was naive. What he had asked me, I thought, was did I have my National Registration Card (NRC) which is needed to draw money from banks in Myanmar. He laughed and said, "Go, go. You may go." I later realized that Fr Neil liked pulling our legs.

Oh, I almost forgot to tell about my perspective on religions. I am a Catholic with strong Catholic parents. They are not just Sunday churchgoers. At home, we never went to bed without saying our night prayers together. Being raised in a pious family, I thought other religions and denominations were not that important until we had a seminar on 'Interreligious Dialogue'. We heard presentations from a Muslim, a Buddhist monk, a Catholic priest and a Columban Sister. We also visited a Buddhist temple, a mosque and our own cathedral. It was an invaluable experience. I became more broad-minded on other religions. Thank you, Fr Neil for the seminar.

September arrived sooner than I had expected, bringing with it final exams which I thankfully passed. I was so excited to become a second-year HEC student.

From the depth of my heart, I say 'thank you' to those who sent me to HEC, which accepted me, opened my eyes and shaped me, and lastly but not the least, I would like to say "I am indebted to our donors and benefactors of the HEC, my second home."

Listen to Indebted to Columban benefactors