The Federation of Catholic Students has been prominent in demanding permanent scrapping of an extradition law proposal. 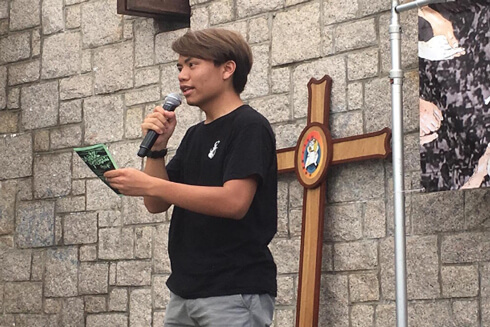 Edwin Chow, acting president of the HKFCS at a prayer service before an anti-extradition law mass rally. Photo: ucanews.com

While Hong Kong was returned from British rule to Chinese sovereignty in 1997, it is supposed to have a large measure of independent administration under previously agreed 'one country, two systems’ arrangements.

Proposed changes to regulations related to the highly sensitive issue of extradition prompted massive demonstrations which were joined by young people who feared they could eventually end up in mainland Chinese prisons.

Pro-Beijing Chief Executive Carrie Lam suspended passage of the changes in the face of mass demonstrations and sit-ins, but demonstrators want the proposals to be permanently and irrevocably jettisoned.

Various churches and Christian organizations are helping to maintain pressure on Lam's administration as well as on the national government in Beijing. And perhaps most prominent among them is the HKFCS (Hong Kong Federation of Catholic Students), which was formed in the 1960s.

Edwin Chow, the acting president of the HKFCS, told ucanews in an interview that he believes the current political involvement is having a positive impact on public perceptions of the Catholic Church in Hong Kong. The Church needed to be "down to the earth" in seeking justice for ordinary people, he added.

Chow is 19-years-old, was born into a Catholic family and is pursuing a university degree in Government and International Studies. He was politically influenced by young Hong Kong activist Joshua Wong, who in 2012 fought against Beijing interference in the education system, as well as by the so-called 'Umbrella Movement' of 2014 seeking genuine democracy.

As well as mass anti-extradition rallies in June, Chow noted that more than 160,000 students, teachers, and alumni from 200 secondary schools signed a petition against the so-called Fugitive Offenders Ordinance amendment bill.

"Many young people fear that the amendment will violate our freedom," Chow said. "They believe that if we do not act right now, we will never have a chance again. They want to protect their home.”

Chow takes the view that young people generally have a responsibility to work for a better society and that this could also be done from a "Church perspective". The Catholic student leader said that regular protests will continue until the extradition bill is permanently dumped. And now the HKFCS is planning to take the anti-extradition movement to a grass roots, parish level to win over more lay Catholics.

That politicians, scientists and economists work together to protect the world’s seas and oceans.