The eyes of faith

Columban Fr Harry O’Carroll tells an intriguing story of visiting a patient at a leprosarium in Japan and how a particular piece of art had influenced the patient’s life. 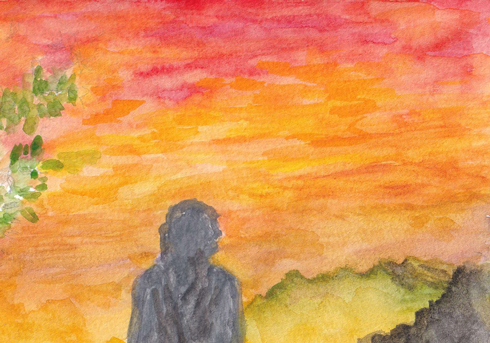 When I was in Ireland many years ago I took a shine to a poster and brought back to Japan with me. It was a picture of Jesus at prayer silhouetted against a flaming evening sky.

At that time I was parish priest of Musashigaoka which had within its borders Keifuen, a leprosarium with over 1200 patients. About a hundred of these were Catholics with their own chapel on the spacious grounds. Fujimoto San was one of these Catholics and as he was not very mobile I used to bring Holy Communion to his little house where he lived alone.

It was on one of these occasions that he fell to talking about a grand picture he once had years ago of Jesus at prayer silhouetted against a flaming evening sky and how he had lost it. He wondered if there was any chance of him getting the likes of it again. Of course, my mind turned quickly to my own poster and after a number of questions to make sure I had exactly what he wanted I decided to part with my treasure.

So one day I had the picture framed and sent to him. A number of his friends were present. It was much admired and with great ceremony hung on the wall. Fujimoto San was delighted.

A number of years and Parishes later someone sent me a copy of the Musashigaoka Parish Newsletter. On the back page, there was a notice announcing the sad news of the death of Fujimoto San. At a Japanese funeral, there is usually a picture of the deceased beside the coffin. At the 30 or so funerals that I have officiated at in Keifuen, I have never seen a photo of the deceased. The reason, of course, is that many of the photos would not be very flattering. That would be due to the disfigurement that can occur with the disease. But if there had been a photo of Fujimoto San at his funeral you would have quickly noticed that, among other things, Fujimoto San had no eyes.

He was blind and had been for many years before I met him and gave him the picture. It is amazing what can be seen with the eyes of faith and he had great faith.

Fujimoto San is now with the Lord and sees everything perfectly. I like to think that sometimes when he is chatting with the Lord he tells him about someone else who has a soft spot for a picture of Him at prayer silhouetted against a flaming evening sky. The Saints do that kind of thing.

Listen to The eyes of faith