Perspective of a century

August 21 this year marked the 100th anniversary of the arrival of the first band of Columbans in Hanyang, China. In commemoration of the occasion, a Mass was offered at St Columban’s Cathedral in the city and at Holy Trinity Church in the rural centre of Xiantao. Despite their expulsion from the country after the establishment of the People’s Republic of China, a strong connection between the Columbans and the local Church in Hanyang remains. 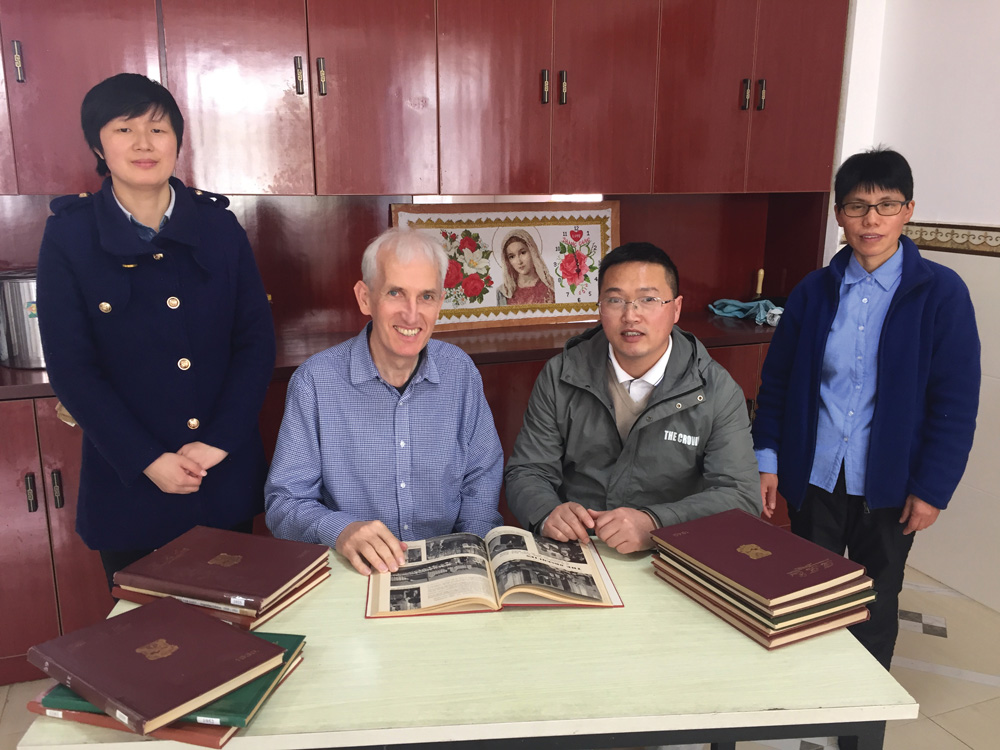 Columban Fr Dan Troy and the parish priest of Xiantao, Fr Joseph Li, examining the collection of bound copies of The Far East magazine that are a proud possession of the parish, along with Srs Agnes Bie (left) and Teresa Wang (right), who made their final profession as members of a local congregation on the following day. Photo: Fr Dan Troy SSC

Memory looks back, while imagination peers forward, but recognition of a centennial is not constrained by either memory or imagination. It marks neither the end, nor the beginning of a road, but rather a moment where 100 years morph into the present.

In 1920, the dreams of the founders of the Missionary Society of St Columban were audacious: an Irish mission to convert the whole of China.

The accepted yardstick of the age was numbers and, although slightly more nuanced, how many baptisms was the operative question, but while the audacious was always beyond reach, the numbers did stack up pretty well. Nevertheless, measured against their goal, they failed.

It especially seemed so as the few who remained after the declaration of the People’s Republic of China in 1949 struggled across the Lo Wu Bridge into Hong Kong, battle wearied, humiliated, traumatised and ill from the deprivation of prison life or the agonising search for a way to survive.

But the Columban vision was broader than numbers. The Society wanted Catholicism to have a cultural impact on Chinese society and saw intensive catechesis and high-level education as the way. It saw it as necessary for the message of the gospel to penetrate beyond the confines of chapel walls.

There was a discernible attempt to move beyond the limits of pastoral care of parishes to concentrated and more inclusive ministries that did not discriminate on the grounds of race or creed. The original vision saw an Irish territory in China where Columbans would work to convert in order to form an indigenous Church staffed by local priests, ultimately with a Chinese Bishop.

There was a vision of internationality too and Columbans set out to connect people in China with their brothers and sisters in the United States of America, Ireland, New Zealand and Australia. They tramped these lands telling everyday stories: about family life, public and Church events, the street markets, food production, arts and crafts, transport, literature and politics.

They especially stressed the witness of the dedicated Chinese Catholics, who themselves worked so hard to spread the good news of the gospel among their own people. Magazines, movies and photographs reflected a profound respect for those among whom they evangelised, for their culture, technology and creativity, as well as sheer courage in facing the grind of simple hard work.

The founders’ vision was open ended. They foresaw priests, sisters, brothers and lay people working together for the good of all people. The Loretto Sisters from the US came to open schools, as did the Christian Brothers from Ireland and Australia. Two doctors volunteered to be part of the outreach, working tirelessly alongside local medics and later the Columban Sisters.

In the post-World War II years, as the bundles of priests and sisters galore that the founders had dreamed of showed promise of materialising, the Society spread its wings across Asia, South America and the Pacific, and programmes inviting diocesan priests and lay people to an in-depth experience of ministry in a foreign culture were added.

They came from the traditional homelands of the Society and, in more recent days, Korean, Pakistani, Myanmese, Filipino, Latin American and Fijian volunteers emerged. Their charter: to go, to learn, to return.

It was also the beginning of the transformation of the Society into a multi-cultural, multi-lingual group, to the extent that when younger Columbans come together today, those who speak English as their first language are in the minority.

However, China never disappeared from the Columban horizon and in the 1980s an imaginative programme to place Catholic teachers in Chinese universities was launched. Over 500 people have taken the opportunity to experience the challenge of witnessing to their faith simply through the example of their lives in a context where words may not be spoken.

Marking a centennial demands a serious search for appropriate criteria to judge the value of what went before; not just a casting back of memory, but an appreciation that can fire the imagination in a way that has a life-giving impact on the present.

What may have seemed like failure in China can be judged differently today, as the Catholics of Hanyang describe the Diocese begun by those pioneer Columbans as a viable and grace-filled home for people of faith.

After 100 years, the challenge of mission may no longer be solely geographical, but rather lie in highlighting the beauty of the multiplicity in God’s creation, in people, in nature and in the economy of a decent life for everyone.

In judging the value of what has gone before, Bishop Edward Galvin, one of the founders of the Society, suggested a credible criteria when he reflected, “We did not come to convert the Chinese, but to do the will of God.”

The challenge of mission today is the same as yesteryear: to discern the will of God and act upon it. A sentiment summed up in the words of the Society motto, To Live for Christ, not for ourselves.

Listen to "Perspective of a century"