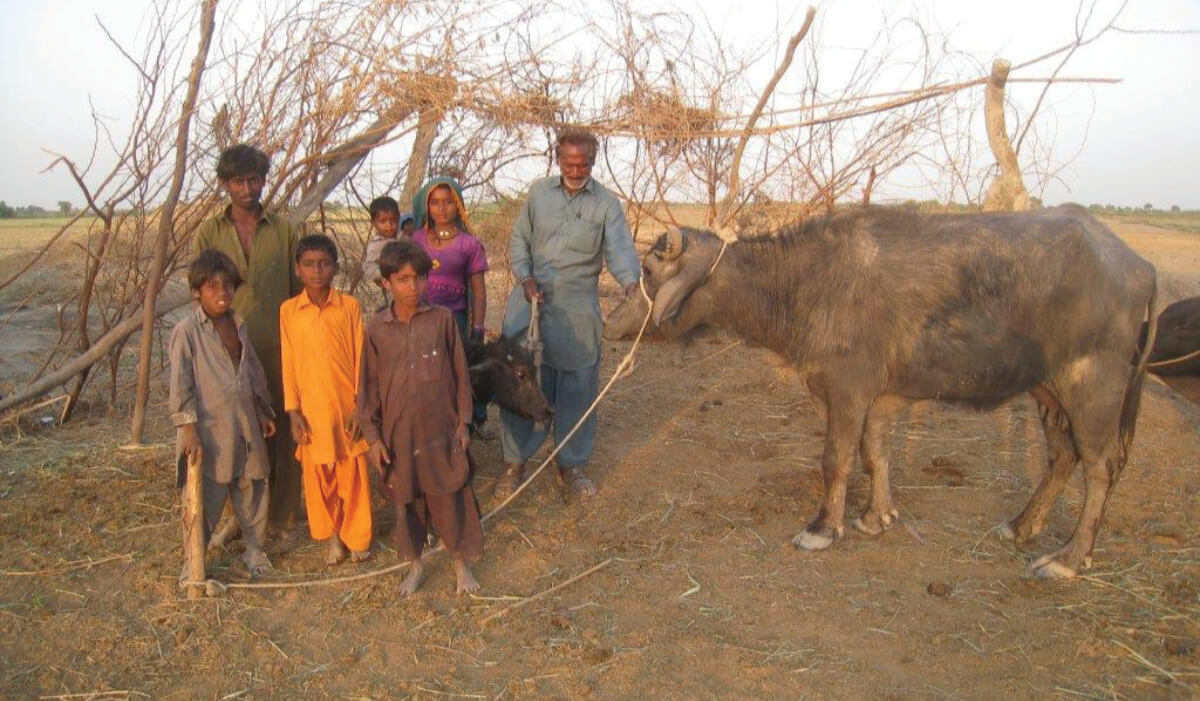 A landless family in Pakistan with their most valuable possession. Photo: Fr Dan O'Connor SSC

Shomo was a poor peasant farm labourer. In May this year, he was working alone clearing the thorn bushes from the side of a village track at the request of his boss when men from a neighbouring landholding suddenly appeared on the scene and dragged him away to the landlord’s house.

Some months previously, Shomo had been involved in a dispute with this landlord and accused of cutting off the water to his crops and channelling it to another property.

When he did not return home that evening, his wife and family became concerned for his safety. They tried many times to contact him on his mobile phone, but to no avail. Suspicion prompted a large crowd of family and friends to go to the landlord’s place, but were refused entry. When they threatened to force the gate to the house, they were reluctantly allowed inside. All the rooms were open bar one. Although they were a large group, out of fear of the power and influence of the landlord system, they did not break the lock on the door to look in the room.

Early next morning, a large number of people from Shomo’s village went to look for him. Some witnessed the landlord washing his hands and feet in a small water canal, but he fled the scene on a motorbike when he saw them. The people were shocked and devastated when they discovered Shomo’s body nearby. It was in a sitting position near a tree with his axe propping up the head. The body and head had fresh wounds and evidence of torture.

A shepherd employed by the landlord confessed that he saw his boss with an associate bringing Shomo to the house. The shepherd was ordered to finish work for the day and leave. It appears that Shomo was murdered because of the dispute over the water and something to do with supplies of wood.

Statements were made to the police. Before burial, the body was taken to the hospital for a postmortem. Two months have now elapsed, but the postmortem was never carried out and no arrests were made.

A judge conducting an inquiry accused the police of taking money and asked why all the evidence had not been documented. Tragically, people with power, money and influence can pay the police and medics to edit evidence. Lawyers can also be involved in double dealing.

The Catholic Diocesan Justice and Peace Commission is following up the case along with some other groups. Much prayer, struggle and perseverance are demanded, as the odds are stacked against achieving any justice or peaceful resolution.

Some years ago, I was in another village when farm workers achieved some justice by blocking the busy road to Karachi for a few hours. Some landlords learned that they could not rule and oppress at will, as the poor landless farmworkers became aware that when they unite in large numbers, they are able to achieve results. We hope something similar can happen in Shomo’s case.

There is a primary school in the village where Shomo lived, but the children from the sixth class up walk to another village to continue their education. Recently, the landlord forbade them to cross his land on the way. The children and parents live in fear of him. This creates tension within the poor farmers and labourers, as any resistance they offer can harden the resolve of the powerful to push people further into submission. At the same time, their silence perpetuates the status quo.

Columban Fr Daniel O'Connor has worked in Pakistan for over 30 years.