Confirmation of a hard fought for faith 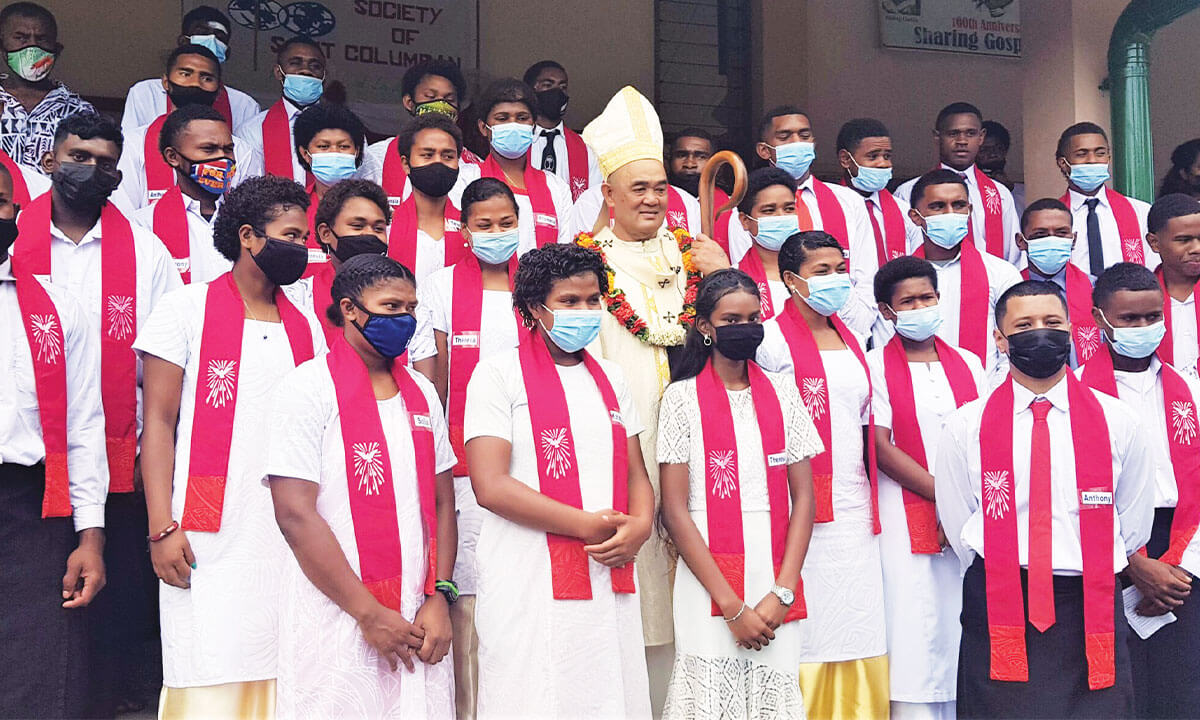 This year marks the 70th anniversary of Columban presence in Fiji.

French Catholic missionaries first arrived at Lakeba in the Lau islands of Fiji in 1844. A few years later in 1851, mission stations were established at Ba and Rewa on the island of Viti Levu, and then at Solevu on Vanua Levu. However, within a short passage of time, missionaries had to be withdrawn due to ill health and, in 1855, all outposts were abandoned, leaving only the original foundation at Levuka.

At this point, the legendary Père (Fr) Breheret built a boat and began travelling from island to island to preach the gospel and, ever so slowly, the mission began to make progress. In 1860, the first Catholic school was opened and by1863 the Catholic population had grown to 6,000.

By the early 20th century, there were 30 Marist priests spread across 250 islands tending to 18 central stations and 273 villages. Further support came in the form of the Marist Brothers. They opened a school in Suva, a seminary and college at Cawaci, and an English school for local Fijians at Rewa.

In addition, 24 European and 31 Fijian Marist Missionary Sisters were conducting the majority of schools for girls and 10 Marist Sisters staffed a school and orphanage at Levuka, as well as a school at Ba. There were also eight Sisters of St Joseph of Cluny involved in various apostolates, and a Marist priest and a Marist Missionary Sister opened a mission for people suffering from Hansen’s disease on Makogai Island.

In the province of Ba, challenges abounded. They ranged from the en masse persecution and imprisonment of Catholics on the river-locked island of Delailagi, a Spanish measles outbreak in 1916 and a huge flood in 1931, to difficulties in outreach towards the large Hindu and Muslim populations. In addition to these challenges, a pervasive tension between the French priests and the British colonialists often limited cooperation between the Church and the government.

Nevertheless, just 70 years ago, when the first group of Columbans arrived in the country in 1952, they had a significant legacy to build on. They took on responsibility for the small parish of St Peter Chanel in Ba and in the following year, the administration of the newly established Xavier College, a school offering education mostly to Indian boys from Hindu background.

The Columbans ran the school up to 1987, when the times dictated that Xavier College become a coeducational campus. The Montfort Brothers took over its administration

and developed the college into one of the most prestigious in Fiji. However, in 2021, responsibility for its administration returned to the parish of St Peter Chanel and, consequently, to the Columbans.

In 1995, a fire gutted the parish church. The then-parish priest, Columban Fr Tom Daly, launched a successful fundraising campaign to rebuild the church for the rapidly expanding Catholic population. Then 20 years later, the parish again demonstrated its vitality, when on the feast of Christ the King an even bigger church was opened to serve the needs of the parishioners. Archbishop Petero Mataca travelled from Suva to consecrate the new building.

The parish gathered again on the anniversary of the opening of the church to celebrate with 34 young people from five villages and four townships who, after delays caused by the coronavirus pandemic, were eventually able to gather to receive the sacrament of confirmation.

Twice delayed, the young people bravely completed their two-year preparation course through a combination of on and off-line sessions. It was truly a joy to welcome Archbishop Peter Loy Chong, the current archbishop of Suva, to celebrate the occasion.

Fine weather welcomed all-comers. Coronavirus compliance teams, ushers, readers, ministers, the choir and, of course, the candidates for confirmation, were present to welcome the archbishop, who praised the young people for remaining faithful to the two-year preparation course, despite two lockdowns and an economic slump.

He compared the sacrament of confirmation with the cultural initiation rituals that are well known and understood by the indigenous people, in which particularly boys are expected to endure pain and isolation. Coronavirus has been such an experience.

We hope that as restrictions ease, these new soldiers of Christ will find creative ways to spread his love and light at home, in their villages and wherever and to whomever God sends them as adult believers.

A hard fought for faith has taken root in many ways in Fiji since the arrival of those first missionaries from France and in the 70 years the Columbans have been in the country, they have seen this faith confirmed. May Christ the King reign and may his kingdom, all people and all creation know this saving power.

Listen to "Confirmation of a hard fought for faith"